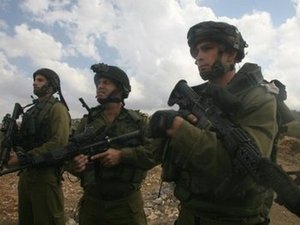 An Israeli soldier was moderately injured on Thursday in a blast apparently caused by an explosive device along the border with the Gaza Strip, an army spokesman said.

"The soldier was moderately injured, apparently by an explosive device," he said, without saying on which side of the border the incident had occurred.

Earlier, a spokeswoman said the incident had taken place near kibbutz Nir Oz, just across the border from the town of Khan Yunis in southern Gaza.

In Gaza, Palestinian security sources said Israeli troops had staged an incursion into an area east of Khan Yunis, and that an explosion had occurred next to an Israeli tank in what appeared to be the same incident.

The army spokeswoman had no immediate information about the reported incursion.