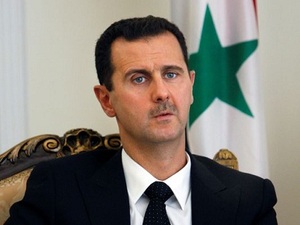 In an interview with Fox News Channel conducted in the Syrian capital of Damascus and aired Wednesday,Assad said terrorists were to blame for the chemical attack, which the U.S. says killed more than 1,400 people, including hundreds of children. He said evidence that terrorist groups have used sarin gas has been turned over to Russia and that Russia, through one of its satellites, has evidence that the rockets in the Aug. 21 attack were launched from another area.

While the U.N. report did not lay blame, many experts interpreting the report said all indications were that the attack was conducted by Assad forces. U.S., Britain and France jumped on evidence in the report — especially the type of rockets, the composition of the sarin agent, and trajectory of the missiles — to declare that Assad's government was responsible.

"The whole story doesn't even hold together," Assad said. "It's not realistic. ... We didn't use any chemical weapons in Ghouta," a Damascus suburb.

Assad said his government would abide by an agreement reached with U.S. and Russian officials to give up his chemical weapons. He says he has received estimates that destroying the stockpiles would cost $1 billion and would take roughly a year.

"We didn't say that we are joining partially. ... We joined fully. We sent the letter. We sent the document. And we are committed to the full requirement of this agreement."

"It's not about will," Assad added. "It's about technique."

While he said the Aug. 21 attack was "despicable" and "a crime," he argued that no one had verified the credibility of videos or pictures of the victims.

"You cannot build a report on videos," he said. He later added: "There's a lot of forgery on the Internet."

He contended that opposition forces, which have been joined by extremist jihadists, could have gained access to sarin.

"Sarin gas is called kitchen gas," he said. "You know why? Because anybody can make sarin in his house. Any rebel can make sarin. Second, we know that all the rebels are supported by governments. So any government that would have such chemical can hand it over."

Assad said the balance of opposition forces has shifted during the more than two-year conflict, and he alleged that 80 to 90 percent were members of al-Qaida or its affiliates.

"At the very beginning, the jihadists were the minority. At the end of 2012 and during this year, they became the majority with the flow of tens of thousands from additional countries," he said adding that they were being financed by individuals who shared their extremist ideologies.

Assad said he had never talked with President Barack Obama. Asked if he wanted to, Assad said it would depend on the content of the conversation.

He said his message to Obama would be to "follow the common sense" of the American people.

Americans have been lukewarm about supporting any military strike on Syria for fear that the U.S. would be embroiled in war.

"At the very beginning, the jihadists were the minority. At the end of 2012 and during this year, they became the majority

Yes, one if the few words of truth from this guy. Again in the beginning you could have stepped down (being unelected and all) and had free and fair elections. You decided to crack down and butcher them instead, turning them into the open arms of extremism.
Some of your followers here would not believe you. They have always maintained that they were al Qaida conspirators from the very beginning.
The fact remains that your heavy handed approach to your fellow Syrians is what opened the doors for these jihadists. You only have yourself to blame.

Assad jr wont stop talking now... "We joined fully. We sent the letter. We sent the document." That means nothing, you are a lying murderer and petty dictator.

No Mr Assad, It is Israel who did it! Ask your friend HA his very clever in mind twists, and subtle lies: When you can't find the evidence, join in the process, back and try to kill it from inside... Nasrallah backed the STL (even the russians did!) , then came up with bollywood 'evidence' about Israel's implication in Hariri's crime. He even pretended to the light-minded that the cell phone data collected was tapered with, but obiviously refrained from presenting any scientific evidence to the investigators, Same goes with Assad today. If the rebels shot Sarin gas on themselves, then Hariri commited suicide to get the syrian army out of the Lebanon!

There are moments that define men; real men. President's Asssad's interview on the zionist controlled Foxnews channel is one of "those" defining moments! His words, his wisdom, clarity, and transparency won the hearts of the American people. His name is being mentioned in every corner of every office, hussainiyeh, school, and campus in the United States. The American public are wishing President Obama would learn sincerity and decisiveness from Assad. I think there is no need to over emphasize the fact that even the Americans know it was Qaida who used chemical weapons. This matter should be put to rest once for all. We need to move on now to address more pertinent issues such as how we can collectively save the world from takfiris and protect the resistance' back. God bless the Baath regime and the resistance.

I am surprised he didn't say the martians did it--after all with 110K killed, I am sure he couldn't possible do such a thing. It is ALWAYS somebody else.

wahahaha! he did EVERYTHING he could so that qaeda grows in syria to shout they are the source of the problem while HE created this problem to better carry out his massacres and so that his sheep followers would back him no matter what...perfect plan. but only fools are too blind to see it like M8ers....
he does NOT care about the syrian people as he is constanly bombing them disregarding who to spread fear and hatred so that people radicalize and create this vicious circle...

"besides, Al-qaeda now is on the border of a NATO country!"

you may want to check your geography, because last I checked Iraq bordered Turkey too, unless hizb iran's maps are somehow showing the old persian empire instead. Remember, education not indoctrination.

"destroying the stockpiles would cost $1 billion" they have it: they just have to pay it with all the money they stole from lebanon and which created lebanese debts!