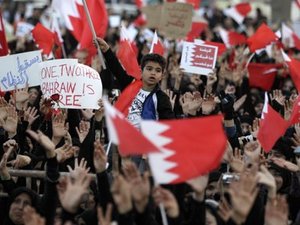 Bahrain's main Shiite opposition formation will shun parts of the national dialogue which the authorities say aims to bring forward reforms in the restive kingdom, a member said on Thursday.

"We believe the dialogue should discuss major political and security issues," Marzooq said.

"This dialogue will not lead to a solution ... and it does not fulfill the needs to pull Bahrain out of its political crisis," Marzooq said.

Al-Wefaq's former MP said that the dialogue participants do not fairly represent society and that those participating are not being given chance to speak during the sessions.

Bahrain on Tuesday held the first session of its national dialogue, which is attended by about 60 participants each in simultaneous sessions on politics, the economy, human rights and social issues -- the four axes on which the dialogue is to focus.

The sessions are scheduled for three times a week -- on Sundays, Tuesdays and Thursdays.

The dialogue comes after Bahraini security forces carried out a mid-March crackdown on Shiite-led protesters who had been demonstrating for reforms in the Sunni-ruled, Shiite-majority kingdom since February 14.

Authorities said 24 people, most of them demonstrators, were killed in the unrest.

The national dialogue was officially launched on Saturday, with over 300 people invited to attend, including representatives of al-Wefaq.

Al-Wefaq, which made an 11th-hour decision to participate, only has five representatives at the dialogue, despite winning 18 out of 40 seats in the lower house of parliament in the last elections.

Marzooq told AFP on Tuesday that all options were open, including pulling out of the dialogue if it fails to address "the will of the people."