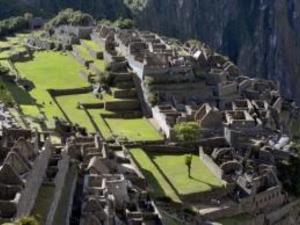 Peruvians celebrate this month the centennial of the "discovery" of Machu Picchu, a world tourist attraction and archeological marvel that has yet to reveal all its secrets.

This 15th-century Inca city of carved stone structures, built high on an Andean mountain range in southeastern Peru, was introduced to the world by American explorer Hiram Bingham.

The handsome Yale University professor, who inspired Hollywood's "Indiana Jones" character, arrived on site on July 24, 1911 at the head of a well-equipped scientific expedition. He shared his findings about this "lost city of the Incas" in the National Geographic journal.

But local farmers had known about its existence for years and even centuries before, as some raised their crops on the citadel's very flanks.

The site's "100 years" will be officially celebrated starting Thursday, coinciding with the fourth anniversary of the site being voted one of the New Seven Wonders of the World in a global Internet poll.

"For Peru, Machu Picchu is like the pyramids of Egypt," said archeologist Luis Lumbreras, former head of the National Institute of Culture.

Historians and archeologists, however, have yet to agree on Machu Picchu's function. Some believe the site was a sacred location while others say it was a resort town for an Inca emperor, or even a fortress.

This mystery adds to the beauty of the site surrounded by tropical forests, and declared a UNESCO World Heritage Site in 1983.

In June, the United Nations warned against overcrowding for the celebrations.

It placed the fortress under heavy surveillance and recommended that the number of visitors be limited to 1,800 per day -- even though more than 1,900 people visit on average each day, according to archeological director Fernando Astete.

Machu Picchu, which means "old peak" in Quechua, the pan-Andean native language, is located 2,400 meters (7,900 feet) above sea level. Visitors must take a train from the city of Cusco to reach the isolated compound, or hike there on foot for several days, often on stone paths built by the Incas.

Up to 1,000 people are believed to have lived at the site, according to experts.

The walls of the stone buildings "were covered in gold but disappeared little by little over two or three centuries," said Lumbreras, a renowned Peruvian archeologist. "Today, only the walls are left."

In 2008, French and Peruvian scientists found that German adventurer Augusto Bernes had "discovered" the lost city, which had never been found by the Spanish conquistadors, 44 years before Bingham.

They also concluded that the site had been pillaged.

Historical records show that at least two Germans, a Briton and a Frenchman, as well as a number of

Peruvians, knew about the citadel before Bingham's arrival.

During his three expeditions, Bingham carried away 44,000 pieces for Yale University, 366 of which were returned to Peru in March.

Though most scholars agree that Bingham put Machu Picchu on the world map, Peruvian specialists accuse him of looting their country of its riches.

Today, a main challenge is preserving this architectural jewel for future generations from the crush of tourists who want to visit Machu Picchu.

In a bid to highlight the importance of conservation efforts, only 700 people will be allowed on the grounds on the opening day of festivities.