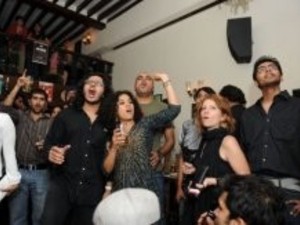 Mumbai may be India's entertainment capital and famous for its nightlife, but with revelers increasingly restrained by local rules and regulations, it doesn't always seem that way.

Last weekend, 31 people were each fined 1,200 rupees ($26) for what police said was "indecent" dancing at a nightspot popular with young call-center workers in a northern suburb.

That followed the introduction of a new law raising the minimum age limit to buy beer from 18 to 21 and spirits from 21 to 25, on top of a stiff tax increase on alcohol last year that forced up prices.

There are concerns that the city's reputation for fun will be hit.

"Mumbai no longer has a great nightlife," complained Purple Punk Prince, the online identity for a 45-year-old quality control manager who said he was caught up in the "dirty dancing" raid last Saturday night and fined.

Purple Punk Prince, who did not divulge his real name, said that regulations were not keeping up with the times, especially as tens of thousands of young Indian men and women now work around the clock for global firms in the city.

"All restaurants shut by 11:30 pm... It is a sorry state of affairs in Mumbai where you can't get a single restaurant to open after 11:45 pm" unless it's at an expensive, five-star hotel, he told AFP in an email exchange.

"(The raids) have impacted on people who really want to go out and have a good time, who are liberal in nature and want to make the most of the freedom given to them," said Kenneth Lewis, a 30-year-old Indian corporate trainer.

The raid prompted the creation of a Facebook group against what those behind it said was "illegal Taliban-style moral policing" in the city, sparking widespread criticism of the police action.

In other parts of the country in recent years, there have been attacks on women in bars, protests against Valentine's Day, vocal opposition to beauty pageants, and calls for bans on girls wearing jeans or skirts.

In 2005, Mumbai's authorities tried to shut down dance bars -- venues that serve cheap alcohol with women dancing to Bollywood tunes -- after calling them dens of iniquity and fronts for underworld activity.

Most such attempts are championed by right-wing Hindu parties, who see themselves as defenders of traditional Indian values against creeping Western influence in urban centers.

Surendra Jondhale, head of political science at the University of Mumbai, suggested the law changes were designed to win electoral support in more conservative areas.

But he added: "It's beyond comprehension why the government is wasting its energy on this issue, with the monsoon delayed and price hikes. There are more important issues."

For bar and club owners, the increase in the legal drinking age -- widely criticized as inconsistent, since Indians can vote and get married at 18 -- has compounded their problems with early closing times and licensing bureaucracy.

Most nightclubs shut at 1:30 am, but the industry has been pushing for an extension to 3:00 am or later.

"It's not just reducing business -- it's destroying business," said Anup Gandhi, who owns the popular Bonobo bar and restaurant, warning that the early closing times could hit expansion of the sector in the coming years.

Rajiv Tandon, who owns Tryst nightclub, called the restrictions financially short-sighted, and said they ran counter to attempts to promote Mumbai as a must-see tourist destination.

"On extended opening times, if my sales increase 10-fold, their (the state's) taxation amount increases 10-fold. It will attract more and more people to come here and have a good time, including from abroad," he added.

For Lewis, the one saving grace of the new drinking age law was that, as in other areas of Indian life, enforcement was likely to be patchy -- and there would always be a party on somewhere in Mumbai.

"Policing all the bars is not possible," he said. "You will see under-18s sitting and drinking. Nobody's checking ID.

"Compared to a city like Bangalore, which is really in the dark ages of partying, I think Mumbai... is still a party town and will continue to be. It's where the arts, cultural and entertainment center of India is.

"And a lot of people here like to get drunk."