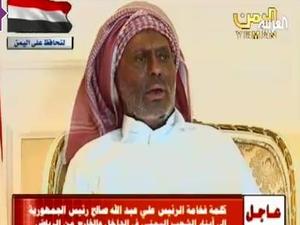 Yemeni President Ali Abdullah Saleh, his face burned and his hands covered with bandages, appeared on television Thursday for the first time since he was wounded in a bomb attack on his palace in Sanaa.

Saleh, who has been hospitalized in Saudi Arabia since the June 3 attack, was barely recognizable and sat stiffly as he spoke in the pre-recorded statement broadcast on Yemeni television.

He said he had undergone "more than eight successful operations from the burns sustained in the accident" and called for dialogue.

"Where are the men who fear God? Why don't they stand with dialogue and with reaching satisfactory solutions" for all Yemenis, said the veteran president, who has been the target of anti-regime protests since January.

"We welcome participation within the constitution and law and based on democracy," said the 69-year-old.

"We are with the participation of all political forces, whether from the opposition or from the regime, but in the light of a plan that would be agreed upon by all Yemenis."

Saleh has refused to give up power despite four months of anti-regime protests that have left at least 200 people killed across the country, saying repeatedly that under the constitution he should serve out his current term of office which expires in 2013.

"The Yemeni people will stand defiant against all challenges that target their security, stability, freedom and democracy," Saleh said.

He thanked Vice President Abd Rabbuh Mansour Hadi, who has come under domestic and international pressure to assume power during the president's absence, "for his efforts in bridging gaps between all political parties" in Yemen.

He also thanked Saudi officials including King Abdullah who have "offered us full attention and care."

Eleven people were killed and 124 others were wounded, among them senior officials in the bomb explosion.

"We will face challenge with challenge," Saleh said.

However, the embattled leader did not mention whether or not he will return to power or to Yemen.

The speech lasted only a few minutes and was followed by fireworks lighting up the sky in Yemen and celebratory gunshots in the capital Sanaa.

Medics at a field hospital set up in Sanaa's "Change Square" where anti-Saleh protesters have camped since February told Agence France Presse that one man was accidentally killed when gunshots were fired in the air.

Why I'm I thinking Crème brûlée all of a sudden?

What a crazy and selfish dictator, he almost died at the hands of his own entourage and he is still talking about staying in power. Can't wait till this dictator and the others face the judgement of their people (in Libya, Syria, Iran and elsewhere).

THEY = KSA and the Arab GFulf States .

The reason is simple : Yemen and Irak are in the Gulf like the other Arab Gulf countries , and the only 2 countries that are not members of the GCC Gulf Cooperation Council .

They did not include them because their 2 Presidents refused to wear the traditional Arab Islamic dress ; the Deshdasha ..!! They were always very well dressed in Western costumes and their wifes also , in western dresses .

The West and especially the US are destroying evry Western sign in the Arab countries , because the Fanatic Saudis wants them to .

Now it is the turn of the very Western Syrian President , like they did in Tunisia and in Egypt and in Lybia

Ali Abdallah Saleh shouldn't have gone to KSA for treatment , he fell in their trap , and is now dressed the way they always wanted him to dress ; The Arab Muslim fundamentalist pre historic way .