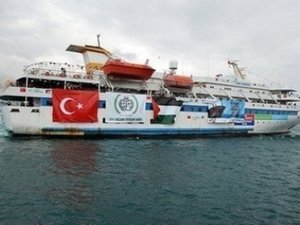 A U.N. rapporteur Thursday slammed a highly anticipated U.N. report said to back a 2010 Israeli commando raid on an aid flotilla aiming to break the Gaza blockade which left nine people dead.

"The United Nations Special Rapporteur on the Right to Food, Prof. Olivier De Schutter, has received a draft of this report and he firmly opposes its conclusions," De Schutter's office said in an email.

He was preparing "a statement where he denounces the conclusions" of the report by a U.N. commission which the U.N. chief is expected to release on Friday, it said.

"Tomorrow, the United Nations Secretary General Ban Ki-Moon will release a statement supporting the legality of the Israeli intervention against the 2010 'Gaza Freedom Flotilla,'" the email said.

"According to Olivier De Schutter, the blockade and the Israeli intervention clearly violate international law and the human right to food," it added.

A U.N. Human Rights Council report released in September said there was "clear evidence to support prosecutions" of crimes including "willful killing; torture or inhuman treatment" against Israel over the raid.

Turkey has demanded an Israeli apology for the deaths, but Israel has refused so far to go further than to express its regret.

Israel-Turkey talks meant to repair strained ties have collapsed, an Israeli official said on Thursday after the two sides failed to reach a compromise.

The U.N. report had been expected to be released Thursday, the Israeli official said, but publication was delayed, ostensibly because Ban is traveling in Europe, but in reality to give Israel and Turkey time to reach a deal.

No further talks were scheduled however, the official said.

Israel's Haaretz newspaper said the report lists faults by both sides in their handling of the issue.

The Turkish ferry Mavi Marmara was leading a flotilla of activists seeking to reach the coastal Palestinian territory in defiance of Israeli orders to turn back, when Israeli marines stormed it, killing the nine Turks.

After that, people will say that STL is fair and that UN was seeking justice when they pushed for it!!!! Israel attacked the boat in International water and in NO WAY it could be legitimate, whatever the standard is. On the boat there were terrorist, Israel says so and the truth becomes obvious for UN (ok, it took time, after the revolt, the condemnations, we are back to the good all support Israel and UN backing from its role and responsibilities to back Israel... same will be with the STL and no doubt that it will be used to move attention from Palestinians anticipated move in September. Bass, it's OK, STL will bring justice to the Cedars, it will punish the people who killed the Chinese and Indian UN personal that died, executed by the IDF in 2006. STL can't protect UN personal in Lenaon and you think that it will protect anyone from being killed, be it a Hezbollah, an FL or Moustakbal member??? Wake-up to reality.... NOW

Mabboud ..ALL UN "investigations" are done by individuals. They do not represent countries or justice, ONLY their political Views. These White (persons of European Heritage) racists are mostly united with the Apartheid state of Israel the same way they supported Apartheid until the early 90"s. Of course, things will change in the future.

Where are all the pro-M14 supporters to comment on this? Come on, you can not be all Israelis? Are you?

mabboud: If the flotilla was proceeding to Syria, they have been all dead by now not only nine IHH fanatic Muslims.
Or want to see what was the outcome of sending flotilla releasing Northern Cyprus from Turkish occupation.

John: In the racist state of Israel 20 percent are Arabs with full civilian rights including social benefits and the right to vote and be elected.
What kind of human rights Lebanon gave to the Palestinians inhabitants ? how many of them can elect tor be elected?
While the tongue have no bone you can talk what you like but you never see the discrimination in your county.

If the your Palestinian brothers starving to death why don't you send food to them via Egyptian border? or you can't speak against Egypt.

Danny B. no one never said that other countries would have been better than what Israel did, the question is not what Syria, Iran or North Korea or even Turkey or the US army would do in such situation... my point is that the UN is mostly corrupted and that there is no International Justice emanating from the security council (ICC could b different since linked to Rome Statutes signed by many good nations). As usual, people r so brainwashed that they look at the finger rather than to the moon; I am not saying that u r an idiot but that us should try to challenge your brain and analytic skills rather than challenge what I don't say. Thanks for your understanding.

I'll make it simple 4 u Danny B. Would u be happy if the UN back Syria or Turkey for killing people on a boat in international water.... would you say.. oh but Israel did it? where r we living? Let's make it simpler, let's ask the UN to stop the STL tribunal and back political assassinations because USrael did it at several occasions. Please, for humanity sake read and take the things for what they are and analyse it to better understand what they mean, it will help u when re-reading what u write to avoid saying stupid things that in full contradiction with your ideas. do u get that or r u going to tell me that other posters also do post stupid and silly things on boards to justify your error. Take the time to think b 4 u type, it will help u a lot. Take care.

"Tomorrow, the United Nations Secretary General Ban Ki-Moon will release a statement supporting the legality of the Israeli intervention against the 2010 'Gaza Freedom Flotilla,'" the email said.

i hope naharnet will issue excerpts from this statement which at the time of this article was not published yet.

then people can criticize. so far, nothing has been released it seems.

peace... we are criticizing the report that is mentioned in the news above and what it infers in terms of legitimacy and REAL justice for all. If UN security council was never an issue, we shouldn't even have a news like the above one. We would have had a clear sentence and statement that what Israel did in "international" water is very bad. No in Internationale water no international justice no UN security council credibility in pushing for Justice. Justice is not only when it pleases. Peace, why do u even post such a post, what is behind it? what's the reasoning? what does it say? explain it to a 4 year old boy why Israel can kill in international water without an immediate condemnation. Why this play with word and biased statements, do u seriously think that we should look the finger that shows Ki-moon speaking or the body behind him? Keep the good posts going and don't try to stop the good ones, it will help all of us debating rather than avoid it. Take care.

the fact that it's even a draft makes all claims hold for what I said above and UN and US fighting for Justice makes then non credible (US vetoed a vote last year for allowing an international investigation.

Additionally, people reading that news and not having ever a ban kimoon final confirmation will take the info as Israel has done nothing wrong... you, in your own comment are asking us to wait for Ban b 4 saying anything, if no news on Ban ever, what happens, what would it mean? Logic is the same, don't u agree? do u think that newspapers mentioning a draft as u said is good or bad for Israel reputation? and what about ethics and double standards? is it good for credibility of ban komoon pushed justice.

If u submit such draft to a vote of the UN (all of them), u will have at least 90%+ who would reject it at a UN general assembly and who would vote for Israel to be condemned. You know that so try to post accordingly and not to stop opinions, it's no propaganda, is it?

Wa7dak el souhyouni a kalb! You have being destroying Lebanon with that stupid mantra since 1948 and we will never again let you sacrifice even one grain of Lebanese sand for anyone other than Lebanon.

You want to fight Israel get yourself some Somalian and Sudanese mercenaries like you did in 75 and go do it the proper way not via Jounieh and Achrafieh but through the Golan! And Allah yese3dak w yebe3dak, enjoy your 76 virgins or whatever the guy with the ice bag on the head is promising nowadays.