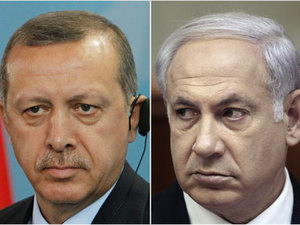 The talks were being held ahead of a U.N. report which Israel’s Haaretz newspaper said listed faults of both sides' handling of the issue, in which Israeli commandos killed nine Turkish nationals.

The official, who spoke to Agence France Presse on condition of anonymity, said that intensive talks in New York and Geneva failed to produce a compromise between Turkey's demand for an Israeli apology and Israel's refusal to go further than to express regret for the deaths of the nine Turkish activists last May.

The Turkish ferry Mavi Marmara was leading a flotilla carrying activists seeking to reach the coastal Palestinian territory in defiance of Israeli orders to turn back, when Israeli marines stormed it, killing the nine Turks.

The Israeli official said that the U.N. commission of inquiry, chaired by former New Zealand premier Brian Palmer, found that the blockade, which Israel says is essential to stop arms reaching the strip's militant Islamic Hamas rulers, was legal.

Turkey argued that it was not.

The U.N. report had been expected to be released on Thursday, the Israeli official said, but publication had been delayed, ostensibly because of U.N. Secretary-General Ban Ki-moon's absence from New York but in reality to give Israel and Turkey more time to come to an agreement.

He said, however, that no further talks between the sides were scheduled.

"That is because the Turks continue to demand an apology from Israel for the killing of Turkish civilians," the mass-circulation daily Maariv said.

Haaretz said that drafts of the report on the May 2010 incident in which Israel's marines stormed the Turkish lead ship of an international flotilla, lists faults on both sides.

"Diplomatic sources in Jerusalem who saw the draft report said it sharply criticizes Turkey for not doing enough to prevent the flotilla from setting sail," the paper said.

"The report says Israeli commandos used excessive force against the Mavi Marmara's passengers, though Israel had insisted the soldiers had been attacked and were acting in self-defense.