U.S. Envoy to Syria in Hama for Talks with Opposition Leaders 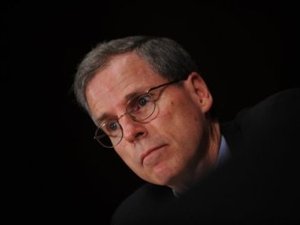 The U.S. ambassador to Damascus is visiting the flashpoint Syrian city of Hama and plans to observe mass demonstrations Friday against President Bashar al-Assad's regime, the State Department said.

Last Friday, an anti-regime rally brought out half a million people in Hama, according to pro-democracy activists. The security services did not intervene and Assad fired the city's governor the next day.

Syrian authorities have been trying to quell protests in the city, traditionally a center of opposition to central government, and have positioned tanks on the main entrances, except in the north.

Ambassador Robert Ford spent the day in Hama, "expressing our deep support for the right of the Syrian people to assemble peacefully and to express themselves," State Department spokeswoman Victoria Nuland said.

Nuland said Ford had spoken to more than a dozen residents in Hama, and visited a hospital where victims of violence were being treated.

"He is interested in seeing the activity tomorrow," she said, referring to the latest in a series of planned protests after Friday prayers.

A senior U.S. official, who spoke on condition of anonymity, said Ford was in the city "to make contact" with opposition leaders.

"We need to know who these guys are, we need to know what they aspire to in terms of political process and a different future for their country. We need to make contact and that's what he's there to do," the official said.

Washington acknowledged last week that Ford had met with opponents of the Assad regime.

Nuland stressed that the ambassador had made "his own trip" to Hama, unlike a previous visit on June 21 to a restive town near the Turkish border in which Ford and other foreign diplomats were escorted as guests of the regime.

"We're greatly concerned about the situation in Hama," Nuland said. "The situation, he (Ford) says, is tense, a lot of shops are closed, folks are concerned."

Hundreds of residents have fled Hama in recent hours, fearing a crackdown from the army on the eve of new demonstrations there and across the country voicing opposition to any dialogue with the Assad regime.

Hama has been a symbol of opposition since the 1982 crackdown on a revolt by the banned Muslim Brotherhood against then-president Hafez al-Assad, father of the present leader, in which some 20,000 people were killed.

Rights groups say that more than 1,300 civilians have been killed and 10,000 people arrested by Syrian security forces since mid-March.

U.S. Secretary of State Hillary Clinton has warned Assad that time for his regime is running out but stopped short of directly calling for him to step down.