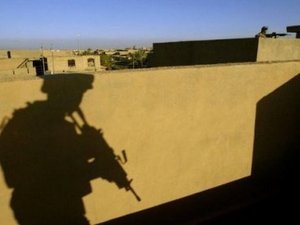 The United States and Iraq are negotiating the possibility of keeping some U.S. forces in the country beyond a December 31 deadline for withdrawal, the U.S. military's top officer said Thursday.

"The negotiations are ongoing and it's hard," Admiral Mike Mullen told reporters at a Pentagon Press Association event.

Mullen's comments marked the first high-level confirmation from the U.S. military that talks were underway on the politically-charged subject, which faces some stiff opposition in Iraq.

He said the discussions were addressing both the size of a possible U.S. military mission as well as the capabilities that Iraqi forces lacked.

"There are very clear capability gaps the Iraqis are going to have," said Mullen, citing air power, air defense and the use of intelligence.

"And both the Iraqi security forces and our forces recognize those gaps are there."

How those gaps in military capability would be addressed is "at the heart of the discussions and negotiations which are ongoing as we speak," the admiral added.

Asked what he believed would be the optimum number of U.S. troops that should stay on beyond this year, Mullen said: "My number doesn't make any difference."

"It's what the Iraqi government and really the Iraqi people say is acceptable to them to provide for their own security," he said.

About 46,000 U.S. troops remain in Iraq and the entire force is due to leave by December 31 under a security agreement with Baghdad.

But top U.S. officials have said that they would consider keeping some there after that deadline if asked to do so by Iraqi authorities.

President Barack Obama's administration has offered to Baghdad to keep up to 10,000 forces in Iraq next year, the Washington Post reported this week, citing U.S. officials.

Such a move would be politically fraught both in the United States and in Iraq, where some view U.S. forces as unwelcome.

Anti-U.S. Iraqi Shiite cleric Moqtada al-Sadr has threatened to launch attacks against American forces if they stay beyond the year-end deadline.

In April, Sadr threatened to reactivate the Mahdi Army, the militia he formally disbanded in 2008, if U.S. forces do not withdraw by December 31.

Obama also risks alienating some members of his own party if he backs off the withdrawal schedule, as many Democrats in Congress are anxious to wrap up the wars in Iraq and Afghanistan.

The once-powerful Mahdi Army, which fought against Iraqi and U.S.-led coalition forces between 2004 and 2007, has been identified by Washington as the main threat to stability in Iraq.

Before it was disbanded, the militia numbered some 60,000 fighters with fierce loyalty to Sadr.