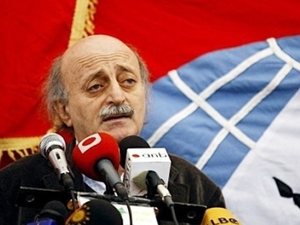 Upon his return from Damascus, Progressive Socialist Party leader MP Walid Jumblat on Wednesday said that his point of view intersected with that of the Syrian leadership regarding the importance of making the most of the Syrian-Saudi rapprochement "through preserving the national unity government and enabling it to face the major challenges."

In a statement issued by PSP's Media Department, Jumblat noted the need to "be alert of the continuing Western efforts to disrupt this Saudi-Syrian rapprochement by sending Western delegates to Lebanon and by adhering to the STL without the slightest regard to stability."

The statement tackled the press leaks "which started with Der Spiegel, Le Figaro, the Wall Street Journal and Yediot Ahronot," noting that "it is an affirmation of the politicization of the Special Tribunal for Lebanon."

The statement stressed the necessity to address issues through dialogue and calm "away from the language of tension which makes problems more complex and solutions more difficult."

Jumblat reiterated his "solidarity" with Syria in the face of "all forms of pressure," noting that the current political situations are similar to the 1982 period that preceded the Israeli invasion of Lebanon and the U.S.-Israeli siege of Syria.