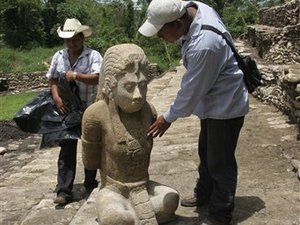 Mexican archaeologists have found two 1,300-year-old limestone sculptures of captured Mayan warriors that they say could shed light on the alliances and wars among Mayan cities during the civilization's twilight.

The life-size, elaborate sculptures of two warriors sitting cross-legged with hands tied behind their backs were found in May in the archaeological site of Tonina in southern Chiapas state along with two stone ballgame scoreboards.

The 5-foot (1.5-meter) tall sculptures have hieroglyphic inscriptions on their loincloths and chest that say the warriors belonged to the city of Copan, archaeologist Juan Yadeun said in a news release Wednesday.

Yadeun said the discovery proves warriors from Copan helped those in Palenque during the city's' 26-year war against Tonina for control of the Usumacinta river.

"The finding of the two captives of Copan is physical evidence that corroborates (the city's) alliance with Palenque in its fight against Tonina," said Yauden, who oversees the Tonina site for Mexico's National Institute of Anthropology and History.

Yauden said that from A.D. 688 to 714 Tonina and Palenque fought several battles over watershed areas in the region that fed the Usumacinta river, which now marks the boundary between Mexico and Guatemala.

Many experts have pointed to internal warfare between Mayan city states or environmental degradation as possible causes of the Maya's downfall starting around A.D. 820.

One of the warrior sculptures is complete and the figure has fabric strips in its ears instead of the traditional earmuffs warriors wore, a characteristic element of carvings of prisoners. The other warrior is missing its head, Yauden said.

Archaeologists found the sculptures and scoreboards at the southern end of Tonina's ballcourt. The inscriptions also show the captive warriors were used as offerings along with fire and incense smoke during a celebration at the field around A.D. 695, Yadeun said.

The Maya believed temples had a life of their own and were "born" when they were inaugurated and that is why blood had to be spilled during the opening ceremony to mark their birth, the archaeologist said.

"The Copan prisoners were possibly used during the inauguration ritual of the second phase of adorning the ballcourt so they could give 'life' to the structure," Yadeun said.

It was around the time of conflict with Palenque that Tonina's Maya leaders consecrated the ballcourt to battles fought and victories won and new scoreboards were made, Yauden said.

The scoreboards found also have inscriptions that refer to Copan's kingdom, Yauden said.

Archaeologists not connected with the dig heralded the finding, but expressed caution about concluding the sculptures are proof that distant Copan was a direct player in the battles between Palenque and Tonina.

"Although Tonina is known for the virtuosity of its sculptors in depicting the human form and for its many images of captives, this new discovery ... is extraordinary," wrote Susan Gillespie, an archaeologist at the University of Florida. "These texts and the sculptures themselves are helping to write a history of the various allegiances, battles, defeats, acts of capture and sacrifice that embroiled the competitive Maya capitals in the Late Classic period."

David Stuart, a specialist in Mayan epigraphy at the University of Texas at Austin who saw photos of the sculptures, disagreed with Yauden's conclusions.

"Copan is not being referenced in any way," Stuart wrote.

"Perhaps there's more evidence I'm still unaware of, but these two statues refer to prisoners already known from other Tonina inscriptions, and I suspect they are probably more local to the Chiapas region," he added.

Stuart said the main purpose of the sculptures was to commemorate a dedication of the ballcourt at Tonina on June 27, 696.

"The prisoner depicted in the well-preserved portrait was captured on October 2, 692. I see this as good evidence that he, like other important elite captives, was probably kept around for a time before being sacrificed," Stuart added.

A request for an interview with Yauden at the anthropology institute was not answered.