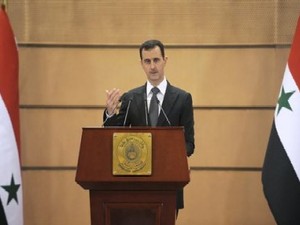 Syria is committed to the convention against chemical weapons it signed under a U.S.-Russian deal and sees "no obstacles" to its implementation, President Bashar Assad said in an interview broadcast Thursday.

Speaking to Venezuela's Telesur, the Syrian leader insisted that his regime was complying with a deal under which Damascus will turn over its chemical weapons for destruction.

"Syria is generally committed to all the agreements that it signs," he said in an interview published in full by the Syrian state news agency SANA on Thursday.

He said Damascus had begun to send the required details of its chemical arsenal to the Organization for the Prohibition of Chemical Weapons which is overseeing the deal, and that OPCW inspectors were expected to visit Syria.

"Experts (from the OPCW) will come to Syria in the coming period to look into the status of these weapons," he said.

"As the Syrian government, there are no serious obstacles," he said.

"But there is always the possibility that the terrorists will obstruct the work of the experts by preventing them from accessing certain places," Assad added.

The Syrian regime calls all those fighting against it "terrorists".

Syria agreed to turn over its chemical arsenal under a deal thrashed out following an August 21 sarin attack in the suburbs of Damascus, which killed hundreds of people.

The attack, which occurred as U.N. chemical weapons experts were in Syria investigating previous alleged chemical attacks, was blamed on the Syrian regime by Washington and other international backers of the Syrian opposition.

Assad's government denies involvement, but agreed to turn over its chemical arsenal in the face of threatened U.S. military action in response to the August 21 attack.

The U.N. experts, who confirmed that sarin gas was used in the attack, arrived back in Damascus on Wednesday and are to resume investigations into other previous alleged attacks.

Assad said his government would ensure the U.N. experts were also able to move around freely, insisting that his regime had invited them to come.

"We are the ones who invited them to come to Syria in March when the terrorists used poison gas in a suburb of the city of Aleppo," he said.

More bad news for the war mongers specifically the US and Israel. This takes the chemical weapons issue away from Israel and spotlights their own weapons of mass destruction; chemical, biological and nuclear.

In yet more bad news for the war mongers Rohani says a nuclear deal could be completed in 3 to 6 months. Israel will no longer have a nuclear smokescreen to hide its Apartheid crimes.

Rohani ~ ""If we are on the issue of the nuclear file, we need resolution in a reasonable time," he told the Post.

"The only way forward is for a timeline to be inserted into the negotiations that's short -- and wrap it up. That is a decision of my government, that short is necessary to settle the nuclear file.

"If it's three months that would be Iran's choice, if it's six months that's still good. It's a question of months not years."

The world's admiration and respect for President Assad grow by leaps and bounds with every passing moment. His credibility is at an all time high; His charisma and eloquent interviews have won the hearts of millions the world over. Young teen aged girls are purposely getting pregnant to conceive a child and call him Assad. Yes, Syria is generally committed to all the agreements that it signs. Syria's past and present behavior is testimony to the trueness of this profound and accurate statement. Syria was committed to its agreement in Lebanon and Iraq. In Lebanon, The Assad regime stayed in Lebanon for over 30 years to ensure this commitment is fulfilled. It protected the minorities specially the christians, arrested the outlaws, and hosted thousands of Lebanese in Mezzé Correctional Facility, an upscale Damascus suburb. Today, many of these Lebanese have been re-integrated into society albeit missing a leg or an arm or unable to reproduce. God Bless you my President