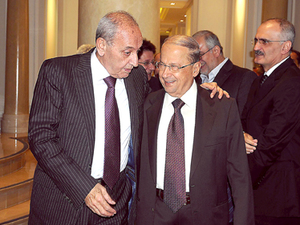 Speaker Nabih Berri has reportedly suggested giving the leadership of the General Security Department to a Maronite in return for appointing a Shiite as Army chief.

Al-Liwaa daily said Tuesday that Berri’s proposal came after the Free Patriotic Movement expressed the desire to return the seat of the General Security’s presidency to the Maronite sect rather than keeping it with Shiites.

The speaker told FPM leader Michel Aoun that if the Sunni sect is holding onto the post of the Internal Security Forces head then the Shiite sect could drop its demand for the General Security chief in return for getting the post of Army leader which is currently filled by Maronite Gen. Jean Qahwaji.

Hizbullah and Amal are backing Maj. Gen. Abbas Ibrahim for the General Security leadership post. Al-Liwaa said that Berri was proposed to appoint Ibrahim as director of Army Intelligence but the speaker refused.

The bickering between the FPM on one side and Hizbullah and Berri’s Amal movement on the other will likely postpone the appointment of the General Security leader.

President Michel Suleiman’s visitors told al-Mustaqbal daily that the appointment will not be made at Thursday’s cabinet session which is expected to witness a series of appointments to other top posts.

According to pan-Arab daily al-Hayat, Aoun hasn’t yet made a public announcement on the issue because he is hesitating into engaging in a political battle with the Shiite sect.

Political sources told the newspaper that Shiites which gave up a minister from their share to facilitate the formation of the cabinet are not ready to make more concessions by giving up their demand for the leadership of the General Security Department.

Informed political sources said, however, that the differences on the issue could be solved through intensified contacts between Hizbullah and Aoun.

The Siites gave up a minister from their share to the Sunnis , not to the Christians or Maronites !!

The system in Lebanon is based on 50 / 50 bases and not on a third bases , like the Shiites wants it to be . There is the Christian share from one side , and the Muslim share from another .

Today there is a problem between the Sunnis and the Shiias , that has nothing to do with the percentage that lebanon was and is still built on ..!!?? wich is 5O / 50 .

Such important and very delicate problems have a great meaning for the future and for fiture relations and political alliances , where the base is concerned ..!! GMA should understand that and not give up our rights like March 14 Christians did with Hariri .

This story highlights why Lebanon will sadly remain a primitive country. Jobs should be given according to merit , not sects or any other irrelevant information. This is supposed to be a united cabinet, all of the March 8th camp, but even they can not appoint positions without sectarian bickering.

Al-Liwaa said that Berri was proposed to appoint Ibrahim as director of Army Intelligence but the speaker refused.

Can you correct it ?

When Hezbollah integrates into the Lebanese armed forces, then they will be entitle to the army chief spot. Until then it should stay as it is. General Qahwaji is very good at what he does and there is no need to replace him.

I think Berri should be President and the Shiites should control whatever is left of this disintegrating feudal so called country. A nation such as Lebanon deserves a president such as Berri, an army such as Hizbullah, a Murshid such as Nassrallah, and a whimsical dictator such as Aoun. Take all Lebanon if you wish.....

The enemy within is spreading every where in the Lebanese structure. They must be stopped

short Michel Aoun is the worst thing to happen to the Maronites... Divide and conquer and he pushed division... and yet he has some followers...

Le Phenicien,... get your mouth off his boot!

Lebanon doesn't have room or anyone other than GMA !! Everyone else should leave!

Why does religion matter? Why can't the best people be in charge? This is why Lebanon s going backwards!

@bigger
You are right in principle. But are you willing to take that risk... who knows what would have hapened should the Army chief had been close to Hezbollah in 2006...

bigdig, i thought an army should be for its people not for a part of the people...

I do not think there is anything to worry about. Hezbollah and their allies are walking on the path of their disarmament.

Shiite or no shiite, the shiites are 65 % of the army, and 90 % of those who are non-shiites are politically allied with the shiites. Hence why our army is only good at gazing at women and eating snakes while having their picture taken. We allowed the shiites to take over our country and now we complain. Its a disgrace. Both FPM/Marada as well as LF/Phalange party are to blame for this. Each side chose their favorite muslim and fought their fellow maronite for the sake of islam. Now we sit back and watch lebanon be islamisized the sunni way in some areas and the shiite way in some areas, yet we still remain supporters of our favourite muslim while fighting each other. The Muslims are smart, whearas we are the fools.

Kif each one fought the other maronite for the sake of islam Eli?