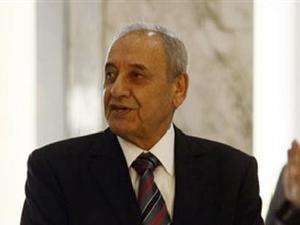 Berri dismissed accusations that the Hizbullah-led Opposition was crippling the Government.

"March 14 is the one that bears a direct and clear responsibility for crippling the Government," Berri said in remarks published Monday by As-Safir newspaper.

He said Prime Minister Saad Hariri's insistence not to hold a Cabinet session if the Opposition wants a vote on the false witnesses' issue has crippled Cabinet.

Hariri "has informed the President that he refuses to vote in Cabinet to forward the false witnesses' issue to the Judicial Council and threatened to withdraw from any meeting that supports the option of voting, thus crippling Cabinet due to his stance," Berri said.

"The ball is now in the court of President Michel Suleiman and Hariri, and they have to agree to convene a Cabinet meeting immediately," Berri believed.

He suggested that if Suleiman was embarrassed, he can ask his Cabinet ministers to stay neutral in any vote.

"If the prime minister wants to withdraw, let him withrdraw. The important thing is to get over with this (false witnesses) issue," Berri concluded.