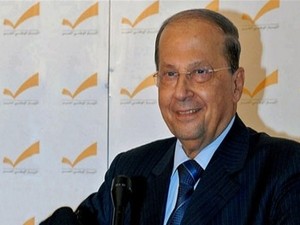 Free Patriotic Movement leader MP Michel Aoun stated on Wednesday that a state that cannot put false witnesses on trial is a not a real state.

He asked after the movement's weekly meeting: "Should the false witnesses' interests be achieved at the expense of the interests of all citizens?"

"Solving the false witnesses file lies in changing the government, its policy and approach," he stressed.

Addressing the Internal Security Forces' structure, the MP said: "It has been built on mistakes and it suffers from a major flaw."

"We have started to discover the parliamentary majority's mafia members at the ISF," he added.

Turning to ISF chief Ashraf Rifi, Aoun stated: "He should understand that his position has been granted by the law, and he should abide by it the most otherwise he will be labeled as a gangster."

"There is no such thing as a criminal trial law at the intelligence bureau," he continued.

Furthermore, he revealed that a complaint had been filed against the ISF over former general Fayez Karam's arrest because he had been arrested for 69 days, when, according to the law, the custody period should last 48 hours, 72 at most.

"They accuse us of defending agents … all that they have done against Karam should halt the investigation and an individual should be called an agent once he is convicted," Aoun stressed.