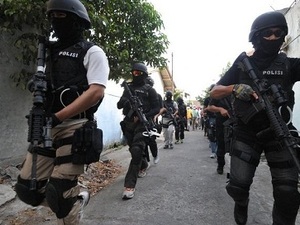 The men, who police believe to be ethnic Uighur from China, are suspected of arranging to meet the country's most wanted militant, Santoso, for training. They were formally arrested on Friday night after a week in custody.

Police are also investigating whether the men have links to the Islamic State group that has seized control over parts of Syria and Iraq, but say their motives for seeking training are so far unknown.

Santoso's Eastern Indonesia Mujahidin (MIT) network hides out in the central mountains of Sulawesi island, a known hotbed for militancy, and is blamed for a spate of police killings in the area.

This is the first known case in recent years of foreigners coming to Indonesia for training.

Authorities have been more concerned with the dozens of Indonesians joining jihadist groups in Syria and Iraq, fearing they may return with networks and skills to carry our deadly attacks in the country.

Police initially thought the men were Turkish nationals but later said their Turkish passports were discovered to be fakes and had been obtained for around $1,000 from a broker in Bangkok.

They now believe the men are from China's Xinjiang province and are Uighur, a mostly Muslim ethnic minority, but have not officially confirmed their identities.

"Today we have been working with officials at the Turkish embassy to investigate their background," national police spokesman Ronny Sompie told AFP.

"On Sunday, officials from the Chinese embassy will coordinate with counter-terrorism police to help determine their identities and nationalities," he said.

Three Indonesians were also formally arrested and named suspects for aiding the foreign men. Under Indonesia's legal system, suspects are only formally charged once they face court.

Indonesia has in the past struggled to quell Islamist militant groups, which carried out a string of deadly attacks last decade, including the 2002 Bali bombings that killed 202 people, mostly foreigners.

A successful clampdown in recent years has seen the end of major lethal attacks, but has given rise to smaller splinter groups.

Indonesia is home to the world's biggest Muslim population. It is also the world's third-biggest democracy, where the vast majority practice a moderate form of Islam.