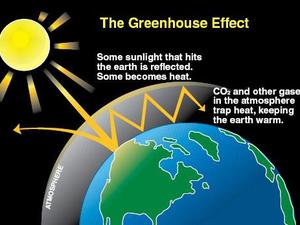 What you may know as a greenhouse is the plastic structures farmers install above agricultural produce. The purpose is to make the atmosphere warmer inside the greenhouse for the fruits and vegetable to grow.

This phenomenon applies to our planet as the greenhouse gas effect is a natural process. In fact, it is because of this effect that planet Earth is habitable. As the sun emits its radiation, the greenhouse gases trap the heat inside the atmosphere and balances temperatures in order for life to thrive and evolve. Some greenhouse gases you may know are carbon dioxide (CO2), methane (CH4) and nitrous oxide (N2O).

Since the industrial revolution in 1850, human beings started using fossil fuels (coal, gas, oil) as an energy source. This in turn led to an unprecedented growth in economic and social development. What started to happen since the beginning of the planet’s industrialization, coupled with a staggering population growth, is an increase in the greenhouse gas emissions into the atmosphere. The main sources are: the burning of fossil fuels for energy, transport and industrial processes, agricultural practices, solid waste, and deforestation among others.

When greenhouse gas concentrations started to increase, more heat was being trapped inside the atmosphere, and the global temperature average began to inflate. This is called global warming.

Now you are probably wondering how climate change fits into all this. Climate change is a result of global warming.

Because the global temperatures are increasing, it is triggering a pattern of changing climate around the world.

As for the impacts, they will not be similar from one geographic area to another. For example, the poles will be hit the hardest with ice melting at a fast rate. It will rain less in desert areas but more severely in tropical areas. Hurricanes will be more frequent in the Atlantic etc. (click here to access world map of impacts, (IPCC AR5)).

In a nutshell, climate has previously changed in the planet’s history, but the anthropogenic (or human caused) emissions have triggered a change of much larger magnitude than any other time. To know more, watch “An Inconvenient Truth” by Al Gore.