Yes, Climate Change is Under Negotiations 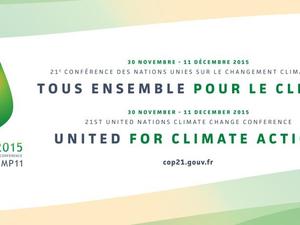 In response to the emerging evidence that climate change could have a major global impact, the United Nations Framework Convention on Climate Change (UNFCCC) was adopted in 1992 in Rio de Janeiro.

The ultimate objective of the Convention is the stabilization of greenhouse gas concentrations in the atmosphere at a level that would prevent dangerous human-induced interference with the climate system. The Convention recognizes that developed countries are responsible for the largest share of historical and current global emissions of greenhouse gases and hence, should take the lead in combating climate change.

The Convention also recognizes that developing countries are more vulnerable to the adverse effects of climate change, either because of their sensitive natural systems and/or their lack of resources to adapt appropriately to those impacts. It is also more challenging because the developing countries’ responses to climate change should be coordinated with their social and economic development needs for the achievement of sustained economic growth and the eradication of poverty.

As an early recognition of the need for an effective instrument to provide confidence in addressing the climate change challenge, the Kyoto Protocol was established in 1997 as a legal instrument where future action can be intensified. For the first time, it calls for legally binding commitments from the developed countries to reduce, individually or jointly, emissions of six greenhouse gases (CO2, CH4, N2O, HFC, PFC and SF6) by more than 5% in the period 2008 to 2012, below their 1990 levels. The European Union and its Member States at the time agreed to an 8% reduction.

During the second commitment period, Parties committed to reduce greenhouse gas emissions by at least 18% percent below 1990 levels from 2013 to 2020; however, this amendment has (as of November 2013) not entered into legal force since not enough countries have ratified it.

Since the Kyoto Protocol’s second phase is coming to an end in 2020, Parties have a responsibility to increase their level of ambition which will limit global greenhouse gas emissions before crossing the 2 degrees Celsius threshold.

The 2 degrees Celsius limit is a result of several studies, which state that if the global temperature average increases by more than 2 degrees, the impacts of dangerous climate change will be irreversible. Other studies have also stated that this will be reached between 2036 and 2040.

In 2013, at the 19th Conference of Parties1 in Poland, Parties have realized that the factor of success to avoid crossing the threshold will be to ensure the participation of all the countries to reduce their national greenhouse gas emissions, not only the developed ones as was the case under Kyoto Protocol. Hence, a new legal instrument or an agreed outcome with legal force under the Convention, applicable to all Parties will be prepared by 2015, to come into effect and be implemented after 2020.

The Republic of Lebanon ratified the United Nations Framework Convention on Climate Change in 1994 with Law No. 359 as a Non-Annex I Party1. The Kyoto Protocol was ratified by Lebanon in 2006 with Law No. 738.

The Ministry of Environment is the national entity responsible of implementing the United Nations Framework Convention on Climate Change. The Lebanese delegation has been participating in international climate change talks since 2006, and is on track in negotiating the 2015 agreement in the upcoming sessions and at the 21st Conference of Parties in Paris this December.