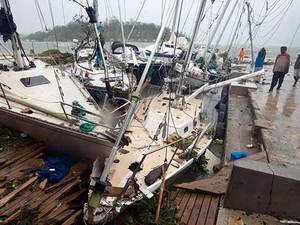 Vanuatu's President Baldwin Lonsdale said Monday climate change was a key factor in the devastation wrought on the Pacific nation by Super Cyclone Pam, which left six dead and 30 injured in the capital Port Vila alone.

"Climate change is contributing to the disaster in Vanuatu," he said in comments carried on Australian television ahead of his departure from Japan to Sydney.

Pacific island nations regard themselves as the frontline of climate change, given that as low-lying islands they are dangerously exposed to rising sea levels which they say threaten their very existence.

"This is a very devastating cyclone that has crossed Vanuatu," Lonsdale said from Sendai, where he had been attending a United Nations conference.

"I term it as a monster. It's a monster that has hit the republic of Vanuatu," he said as he called for humanitarian assistance ahead of his departure for Sydney, from where he will travel to Vanuatu.

"It means that we have to start anew again."

Lonsdale said the death toll in the capital Port Vila was six, but he was still seeking information from outer islands.

Aid agencies estimate more than 90 percent of housing has been damaged or destroyed in the capital, which has a population of about 45,000.

"Confirmed dead in (Port) Vila is six, and more than 30 injuries in Port Vila alone," a visibly shaken Lonsdale said.

About 1,000 people had sought shelter in evacuation centers in Port Vila as the storm passed over, he said.

"I do believe that the number of casualties will not be high, and I don't want that to happen," he said of his nation's capital.

There are greater fears for the southern islands, and authorities are struggling to reestablish communications with communities there after the storm finally swept out to sea late Saturday.

Aid agencies say they are concerned about the safety of tens of thousands of people living in these areas after the passage of Pam, one of the most intense cyclones to hit the nation.