EU Official: Humanity at 'Five to Midnight' on Climate 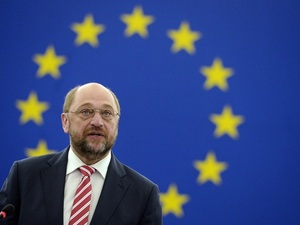 Time is running out for the world to achieve a climate change agreement, the president of the European Parliament said Tuesday ahead of a key United Nations meeting in Paris later this year.

"We have to recognise that it is five minutes to midnight, and that the goals we have defined are not European, American or Chinese," Martin Schulz told reporters during a visit to China.

"Whoever is responsible has to understand that the fight against climate change is a fight for the survival of humanity," he added.

"The price for our failures today will be paid by future generations. That means it is a responsibility for all of humanity."

Schulz, who met President Xi Jinping on Monday, said he felt for the first time that Chinese understanding of the seriousness of the issue had increased "considerably".

Countries are preparing for a crucial U.N. meeting in Paris -- the 21st Conference of Parties, or COP 21 -- of the U.N. Framework Convention on Climate Change (UNFCCC), which groups 195 nations.

"We agree completely and entirely on both sides that the climate conference in December in Paris is a decisive moment not only for China and the European Union," Schulz said at a press conference.

"I think this is a decisive moment for the worldwide development and both sides, the European and the Chinese sides, are committed to get a common, binding agreement for the climate change goals in Paris."

A ministerial-level meeting of U.N. climate negotiators in Lima last December yielded a 37-page blueprint for the agreement, which countries had in 2011 agreed to finalise by the end of this year.

The pact must enter into force by 2020 to further the U.N. goal of limiting global warming to two degrees Celsius (3.6 degrees Fahrenheit) over pre-Industrial Revolution levels.

Scientists warn that on current greenhouse gas emission trends, the Earth is on track for double that -- a recipe for catastrophic droughts, storms, floods and rising seas.

The European Union earlier this month formally adopted climate change targets for the Paris conference, including a 40 percent cut in greenhouse gas emissions by 2030 compared to 1990 levels.

The United States, which accounts for 12 percent of global emissions, announced its intention to reduce them by 26-28 percent in 2025 compared with their level in 2005.

China, which is the world's second-largest economy and accounts for 25 percent of global emissions, has set a target date of "about 2030" for its emissions to peak, but has not pledged any reductions.

Schulz said: "We have to manage growth and environmental questions at the same time."

Beijing this month cut its annual growth target to about seven percent.

Schulz added: "As a European leader we are jealous to listen to such growth rates."

"We have to manage growth and environmental questions at the same time."