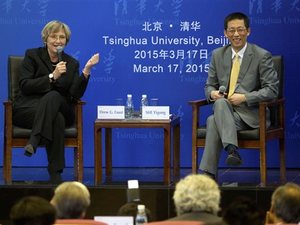 The Harvard president told students at one of China's most prestigious universities Tuesday that academic institutions must be unfettered places where every topic can be raised and every question asked to help tackle challenges such as climate change.

The comments by Drew Gilpin Faust were part of a 30-minute speech at Beijing's Tsinghua University on climate change in which she urged universities in the two countries to collaborate on research and on teaching the next generation how to deal with climate change.

"Knowledge emerges from debate, from disagreement, from questions, from doubt, from recognizing that every path must be open because any path might yield an answer," Faust said.

Her speech at the alma mater of Chinese President Xi Jinping came one day after she met Xi for discussions on U.S.-China cooperation in higher education and the threat of climate change.

The comments contrast with efforts by the Chinese leadership under Xi to impose a more doctrinaire approach to education in China and to purge campuses of what has been labeled Western liberalism.

Since Xi took power in late 2012, some outspoken Chinese professors have been marginalized, silenced or expelled from their institutions. Economics professor Ilham Tohti, an ethnic Uighur scholar who had advocated for the rights of the Uighur minority, was sentenced last fall to life in prison on separatism charges.

This is Faust's second trip to Tsinghua University as Harvard's president. During her previous visit to the school in 2008, she spoke on the value of higher education as "illuminating one's bright virtue."

Faust met this time with Harvard alumni in China. She also invited Xi to visit the Ivy League school, where the Chinese president's daughter has studied.