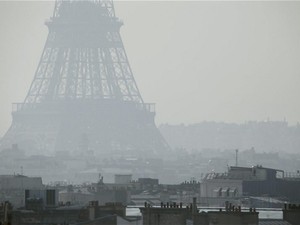 The Eiffel Tower disappeared behind a brown smog on Wednesday as Paris and much of northern France suffered a spike in pollution.

"The pollution levels are consistent. If we don't go over the alert level, we won't be far away," said Airparif, the body responsible for monitoring air quality in the greater Paris region.

In Paris, authorities measure the concentration of particulates with a diameter of less than 10 microns -- so-called PM10 -- in the air to determine pollution levels.

These particulates are created by vehicles, heating and heavy industry, and include the most dangerous particles that measure less than 2.5 microns in diameter, which can penetrate deep into the lungs and the blood system and can cause cancer.

The safe limit for PM10 is set at 80 microgrammes per cubic metre (mcg/m3).

Since Wednesday morning, authorities have put in place certain emergency measures, such as limiting cars to 20 kilometres per hour (14 miles per hours) on motorways in the Paris area.

Authorities have the power to put into place emergency measures such as allowing only one in two cars to enter the French capital and making public transport free.

This was last implemented on March 17 last year during a particularly bad spike in the pollution levels.

According to a 2011 World Health Organisation report, the planet's most polluted city was Ahvaz in Iran with an average of 372 mcg/m3.