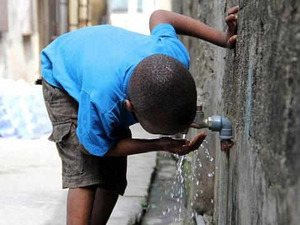 Without reforms, the world will be plunged into a water crisis that could be crippling for hot, dry countries, the United Nations warned Friday.

In an annual report, the UN said abuse of water was now so great that on current trends, the world will face a 40-percent "global water deficit" by 2030 -- the gap between demand for water and replenishment of it.

"The fact is there is enough water to meet the world's needs, but not without dramatically changing the way water is used, managed and shared," it said in its annual World Water Development Report.

"Measurability, monitoring and implementation" are urgently needed to make water use sustainable, said Michel Jarraud, head of the agency UN-Water and the World Meteorological Organisation (WMO).

Surging population growth is one of the biggest drivers behind the coming crisis, the report said.

Earth's current tally of around 7.3 billion humans is growing by about 80 million per year, reaching a likely 9.1 billion by 2050.

To feed these extra mouths, agriculture, which already accounts for around 70 percent of all water withdrawals, will have to increase output by some 60 percent.

Climate change -- which will alter when, where and how much rainfall comes our way -- and urbanisation will add to the coming crunch.

The report pointed to a long list of present abuses, from contamination of water by pesticides, industrial pollution and runoff from untreated sewage, to over-exploitation, especially for irrigation.

More than half of the world's population takes its drinking supplies from groundwater, which also provides 43 percent of all water used for irrigation.

Around 20 percent of these aquifers are suffering from perilous over-extraction, the report said.

So much freshwater has been sucked from the spongy rock that subsidence, or saline intrusion into freshwater in coastal areas, are often the result.

By 2050, global demand for water is likely to rise by 55 percent, mainly in response to urban growth.

"Cities will have to go further or dig deeper to access water, or will have to depend on innovative solutions or advanced technologies to meet their water demands," the report said.

The overview, scheduled for release in New Delhi, draws together data from 31 agencies in the United Nations system and 37 partners in UN-Water.

It placed the spotlight on  hot, dry and thirsty regions which are already struggling with relentless demand.

In the North China Plain, intensive irrigation has caused the water table to drop by over 40 metres (130 feet) in some places, it said.

In India, the number of so-called tube wells, pulling out groundwater, rose from less than a million in 1960 to nearly 19 million 40 years later.

"This technological revolution has played an important role in the country’s efforts to combat poverty, but the ensuing development of irrigation has, in turn, resulted in significant water stress in some regions of the country, such as Maharashtra and Rajasthan," the report said.

"Parts of China, India and the United States, as well as in the Middle East, have been relying on the unsustainable extraction of groundwater to meet existing water demands," he told Agence France Presse.

"In my personal opinion this is, at best, a short-sighted Plan B. As these groundwater resources become depleted, there will no Plan C, and some of these areas may indeed become uninhabitable."

Last year, the Nobel-winning Intergovernmental Panel on Climate Change (IPCC) estimated that around 80 percent of the world's population "already suffers serious threats to its water security, as measured by indicators including water availability, water demand and pollution."

"Climate change can alter the availability of water and therefore threaten water security," the IPCC said.

Fixing the problems -- and addressing the needs of the 748 million people without "improved" drinking water and the 2.5 billion without mains sewerage -- requires smart and responsive governance, the new UN report said.

In real terms, this means putting together rules and incentives to curb waste, punish pollution, encourage innovation and nurture habitats that provide havens for biodiversity and water for humans.

It also means learning to defuse potential conflicts as various groups jockey for a precious and dwindling resource.

Tough decisions will have to be made on pricing, and on rallying people together.

"Present water tariffs are commonly far too low to actually limit excessive water use by wealthy households or industry," the report observed.

But it added, "responsible use may at times be more effectively fostered through awareness-raising and appealing to the common good."