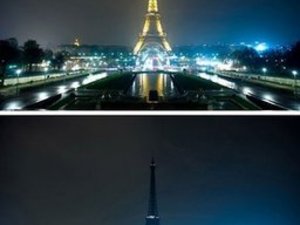 Hundreds of landmarks from Paris' Eiffel Tower to the Seattle Space Needle will dim their lights on Saturday, as people around the world go briefly off-grid to mark Earth Hour with candlelight and barbecues.

The 60-minute annual campaign organised by the conservation group WWF encourages citizens, communities, businesses and organisations to switch the lights off for an hour from 8:30 pm to highlight the plight of planet Earth.

Now in its ninth year, Earth Hour's goal is not to achieve measurable electricity savings, but to raise awareness of the need for sustainable energy use, and this year also to demand action to halt planet-harming climate change.

Earth Hour 2015 takes place just months before UN member states are meant to sign an ambitious pact in Paris in December to limit galloping global warming, and just days before a loose end-March deadline for "those parties ready to do so" to submit their carbon-curbing pledges.

From a small, symbolic event held in Sydney in 2007, Earth Hour has grown to a global campaigning event with a festive twist.

This year will include a glow-in-the-dark Zumba party in the Philippines, a coordinated candlelit dinner in Finland billed as the world's largest, restaurant dinners by candlelight in London, and a power-generating dance floor to light up the Eiffel Tower after its hour-long sleep, said WWF.

The organisers published a list of ideas for individual participants, which included barbecuing instead of stove cooking, a candle-lit street party or a picnic under the stars.

This year's message is: "Use your power to change climate change", according to the Earth Hour website.

"We hope that with each light switch that goes off, the light cast on people calling for action becomes clearer and paves the way ahead for climate action," said Sarronwala.

According to Mike Berners-Lee, a private consultant on business and household carbon emissions, Earth Hour is a powerful way of sending a message "that we really, really care about the success of the Paris talks".

"Turning off your lights for an hour doesn't really do very much about saving carbon. What matters is that you are sending out a message that we really care about this stuff," he told AFP.

"We need to get as much momentum as we can, as far in advance of the Paris talks as we can... The harder we push, and the more people who push, the better the chances will be for a better deal."

An estimated nine million people in 162 countries took part in Earth Hour last year, according to the WWF, of whom 85 percent "said that they felt inspired to do more to protect the planet, such as making small changes to live more sustainably and reduce their impact on the environment."

Sarah Olexsak, the author of a study on the impact of Earth Hour, said that in 10 countries where the event's impact on the grid was measured over six years of the campaign, there was an average four-percent drop in electricity consumption during the 60-minute window of darkness.

"We found that large-scale purposeful behavior change can result in a measurable reduction in electricity at the grid level," she told AFP by email.

"Evidence shows that extensive behavior change requires a first step. People like to be consistent in their behavior and self-image, so by taking that first step in participating in Earth Hour, they show a commitment to energy saving that they may then carry out in other areas of their lives."