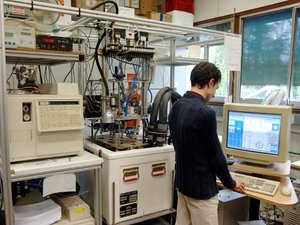 Imagine you are Sherlock Holmes bent on solving a mystery but the evidence is starting to crumble and eventually you will be left with worthless dust.

This is the worry which haunts ice scientists delving into Earth's threatened glaciers.

Deep inside them, the slumbering ice slabs hold information about Earth's climate past, and pointers for the future.

The frozen archive is formed from compacted layers snow which fell hundreds, thousands or even hundreds of thousands of years ago.

Learning more about the past through examining the glaciers could help us predict how our planet will respond when global warming kicks into higher gear -- just decades from now, if predictions are right.

Only a tiny amount of this glacial material has ever been extracted and examined.

And as temperatures rise, the fringes of many glaciers are softening to mush, threatening the survival of this precious testament.

"We are the only scientific community working on climate history whose research material is disappearing," lamented Jerome Chappellaz at the Laboratory for Glaciology and the Geophysics of the Environment in Grenoble, southeastern France.

"It is time to do something -- we have to act now, while the glaciers are still a useable source."

That "something" is a new scheme to build a vault for ice cores extracted by scientists from the deep chill of Antarctica.

About 50-130 millimetres (two to five inches) wide, in sections between one to six metres (a yard to 20 feet) long, ice cores are glaciology's mainstay.

Within them are telltale bubbles of gas, notably the greenhouse-gas carbon dioxide (CO2).

By studying them, "past eras can be reconstructed, showing how and why climate changed, and how it might change in the future," says the U.S. National Snow and Ice Data Center.

The deepest-ever core, drilled in Antarctica, is 3,270 metres long, and revealed the world has gone through eight ice ages over about 800,000 years.

These cycles, which profoundly affect life on our planet, generally move in lockstep with greenhouse gases.

Until the start of the Industrial Revolution in the mid-18th century, these heat-trapping gases had natural causes.

Today, the relentless burning of coal, gas and oil has taken carbon out of the ground and placed it in the atmosphere -- concentrations are now higher than at any time in the ice-core record.

On present trends, Earth could face average warming of up to 4.8 degrees Celsius (8.6 degrees Fahrenheit) or more this century, the UN's Intergovernmental Panel on Climate Change (IPCC) has warned.

But in some "hotspots," warming is happening faster than the global average, and for glaciers at lower altitudes and latitudes, time is running out.

"Antarctica is the best refrigerator in the world," Chappellaz told Agence France Presse.

In the envisioned vault, "the cores will be safe, even if a world war breaks out. There's no need for electricity. It will always be extremely cold. Even if there is 10 degrees (Celsius, 18 degrees Fahrenheit) of warming on the Antarctic plateaux, it will still be minus 43 C there, and the cores will be OK."

The vault would be at the French-Italian research base of Concordia, according to the scheme, which has the support of four other French institutes.

They are casting around for funding and sponsorships.

The U.N.'s Educational, Scientific and Cultural Organisation (Unesco) is considering joining the initiative.

"We support the idea although at this stage, we haven't really figured out how we can provide it," said Anil Mishra of Unesco's International Hydrological Programme.

They can shed light on how different mountain regions respond to sharp swings in temperature, weather patterns and atmospheric pollutants such as soot -- a useful tip in tackling flood risk and securing water supplies.

The first contributions to the vault will come next year, from the Col du Dome, a site 4,300 metres high on Mont-Blanc, Europe's highest peak, and more will come in 2017 from the Illimani glacier, 6,300 metres above the Bolivian capital of La Paz.

Future generations may learn even more from the capsules than current science allows, said Chappellaz.

"A few centuries from now, who knows what kind of technology may be available for analysing the cores?" he asked.