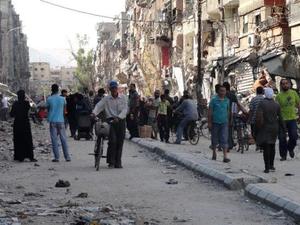 A group of 14 Palestinian factions said Thursday they backed a joint military operation with the Syrian government to expel Islamic State group jihadists from the Yarmuk camp in southern Damascus.

After a meeting of the factions in the Syrian capital, Palestine Liberation Organization official Ahmed Majdalani said the groups supported a coordinated military effort in the camp.

The factions support "a security solution that will be carried out in partnership with the Syrian state and will have as its priority maintaining the security of citizens," he said.

"We agreed that there would be permanent cooperation with the Syrian leadership and the formation of a joint operations room with Syrian government forces and the Palestinian factions that have a significant presence in the camp or around it."

Majdalani added that Palestinian forces would work in an "integrated" fashion "with the Syrian state to clear the camp of terrorists."

But it was unclear whether that position was shared by the Palestinian fighters on the ground inside the camp.

The key Aknaf Beit al-Maqdis group fighting IS inside Yarmuk was not present at the meeting and could not be reached for comment.

The group is opposed to the Syrian government and has cooperated with rebel fighters against IS jihadists inside Yarmuk since the extremist organization entered the camp on April 1.

The Islamist Palestinian movement Hamas also did not attend the meeting, an official told AFP.

Majdalani said Palestinian backing for a military operation was dependent on any action protecting civilian lives and infrastructure in the battered camp.

"The action must take into account the lives of the camp's citizens and avoid massive destruction. It will be carried out in a progressive fashion," he said.

There were no further details on when any operation might take place and who would participate.

On Wednesday, Syria's reconciliation minister, Ali Haidar, said a military operation would be required to expel jihadists from Yarmuk and suggested army forces could be involved.

"The Syrian state will decide whether the battle requires it," Haidar said.

IS jihadists entered the Yarmuk camp last week, quickly capturing large swathes of the district, sparking international concern for the residents inside.

Once home to some 160,000 Syrian and Palestinian residents, Yarmuk has been devastated by violence since late 2012, with about 18,000 people left in the camp when the fighting started.

They have endured regular government shelling and a tight regime siege that has reportedly led to deaths from medical and food shortages.

Though some residents have been able to flee, thousands remain in the camp, and international agencies have urged they be protected.

"Humanitarian needs are growing by the day in the camp," the International Committee of the Red Cross (ICRC) said in a statement on Thursday.

"The ICRC is calling on all involved in fighting to allow the immediate and unimpeded passage of urgent humanitarian aid and to permit civilians who wish to leave the camp for safer areas to be able to do so at any time."

The wise Leftist Palestinians know that they can never trust Salafist scum.