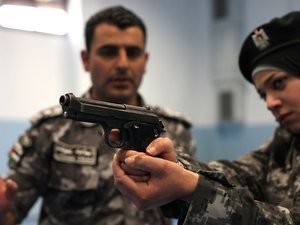 Palestinian police have for the first time been deployed in three areas of the West Bank near annexed east Jerusalem, Palestinian and Israeli sources said on Thursday.

"For the first time, members of the Palestinian police wearing uniform and carrying weapons have been deployed in Abu Dis, Al-Ram and Bido," Palestinian police spokesman Louay Erzikat told AFP, saying the deployment had begun on Wednesday.

"This deployment is intended to target criminals and is the result of coordination" with the Israeli authorities, he said.

The Israeli army confirmed that Major General Roni Numa, head of the military's Central Command, had agreed to let the Palestinians open police stations in all three areas.

"The purpose of these stations is to address criminal matters as well as to maintain public order for the Palestinian population in area B surrounding Jerusalem," a spokeswoman said.

Under Oslo II, the second phase of the 1993 Oslo peace accords, the West Bank was divided up into areas of civilian and security control, known as areas A, B and C.

Area C, which covers more than 60 percent of the occupied West Bank, is where the vast majority of Israeli settlements are located and is under full Israeli control, both civilian and security.

"This deployment is intended to target criminals and is the result of coordination" with the Israeli authorities....