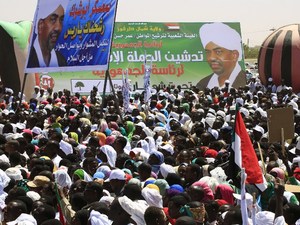 Farouk Abu Issa and Amin Makki Madani were detained in December after signing an agreement to unite opposition to President Omar al-Bashir, who is standing for reelection on Monday.

"The prison told them: 'okay, you are free; go home'," lawyer Mohammed al-Zein told AFP, adding they had received no further details on the decision.

Both were at home with their families in Khartoum, he said.

Their release came as Sudan prepared for presidential and legislative elections, due to be held on Monday.

The mainstream opposition is boycotting the vote and Bashir only faces a handful of little known contenders for the presidency.

"The president doesn't want international pressure or Sudanese pressure because of the elections," Zein said.

A prosecutor had been seeking six charges against Abu Issa and Madani for signing the "Sudan Call" document aimed at uniting opposition groups.

Abu Issa signed on behalf of the a coalition of opposition forces which he leads and Madani signed for civil society groups.

A prosecutor had demanded that the pair be charged for founding and running a terrorist organization as well as inciting war and hatred against the state.