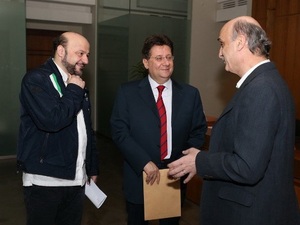 Change and Reform bloc MP Ibrahim Kanaan held talks on Thursday with Lebanese Forces leader Samir Geagea as part of the dialogue between the Free Patriotic Movement and LF and their plan to announce a “declaration of intentions.”

Kanaan said after the meeting: “The declaration is almost complete.”

“We held important talks to that end,” he said from Geagea's Maarab residence.

Discussions are ongoing however over the content of the document, he continued.

“I do not want to announce the results of the talks, but will leave that up to FPM chief MP Michel Aoun and Geagea,” Kanaan stated.

“We have achieved marked progress however,” he said.

“Our efforts are serious and take into consideration the concerns of both sides,” he stressed

Asked by reporters if Aoun will announce a new stance on the presidential elections should Hizbullah fail to support his position on security appointments, the MP replied by dismissing the reports as media speculation.

“We are in the process of preparing a declaration of intent and a political understanding between the FPM and LF in order to ease tensions on the Christian and national scenes,” he stated.

“Internal understandings among the Lebanese, especially among the Christians, are crucial to reaching Lebanese solutions to our problems,” he declared.

Media reports said that the declaration of the document will be crowned with a meeting between Aoun and Geagea with the timing and venue of the talks to be decided later on.

Both Geagea and Aoun have announced their candidacies for the presidency. Their rivalry, in addition to other issues, have left Baabda Palace vacant since President Michel Suleiman's six-year tenure ended in May last year.

The dialogue between the two parties recently kicked off in an attempt to defuse tension and safeguard the country.

Michel Claoun is not feeling well these days, he has more than a health issue, and to be honest? Too bad for him, who cares really.

Caporal is on his highest doses of Leponex, Zoloft and Xanax. I pity him.

Humble, it's true, the Al Capaoun Caporal has not been feeling too well lately and has been diagnosed with much fatigue. Some snapshots have confirmed a tired looking man. But you will see, like always, they'll photoshop him at OTV, making it look as if he was still a teen.