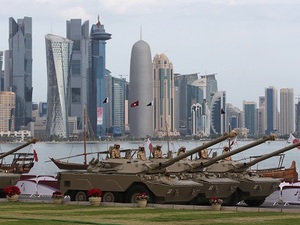 The American embassy in the Gulf state of Qatar has confirmed in a statement on its website that a member of its security staff was injured in an assault.

It is unclear what prompted the incident, which happened on Thursday at the embassy in the capital, Doha.

The guard received what were described as "superficial injuries", and the attacker was arrested and is being held in custody.

Although the embassy statement said that there was "no change to the overall security environment in Qatar," it warned Americans there to remain vigilant and reminded them to avoid "large gatherings" and "identify safe areas."

Obama is not impressed, he says the shooting was at Random, not at all directed at embassy.