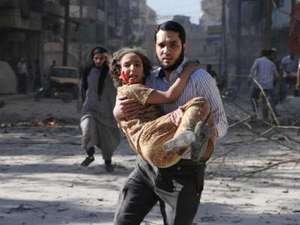 A Syrian regime air strike hit a school in the main northern city of Aleppo on Sunday killing five children and four other civilians, a monitoring group said.

Bloodstains marked the school's entrance, and shattered glass and broken desks were strewn on classroom floors, in images captured by AFP.

As people cleared debris around the school, a Syrian man walked past carrying a wounded child wrapped in a bloodied bandage.

Abdel Rahman said a number of people were seriously wounded and that the death toll from the attack was likely to rise.

One child and two other civilians were killed, and several people were wounded, in separate air strikes on east Aleppo, the Britain-based Observatory reported.

The strikes come after a day after government forces and rebel fighters exchanged fire in the northern city, leaving at least 35 civilians dead.

Many schools in Aleppo city have been forced to close, while others hold classes in basements because of the violence in the city.

Once Syria's commercial hub, Aleppo has largely become a city in ruins, split between regime forces in the west and opposition fighters in the east.

Both sides have been criticized by human rights groups for firing indiscriminately on civilians.

More than 215,000 people have been killed in Syria since the conflict began in March 2011 with anti-government protests, which spiraled into war after a regime crackdown.