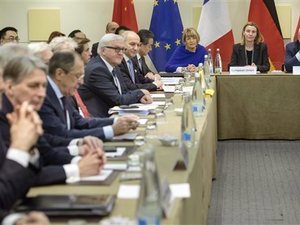 A majority of Iranian lawmakers on Sunday demanded the country's negotiators publish a "fact sheet" on a newly agreed framework nuclear accord, while denouncing details laid out in an American version.

"In a letter, members of parliament asked for the publishing of an Iranian fact sheet, and so far 212 have signed it," Javad Karimi Ghodusi, a member of the 290-seat assembly, was quoted as saying by the official IRNA news agency.

On April 2, Iran and world powers agreed on a framework accord to be finalized by the end of June to rein in Tehran's suspect nuclear program in exchange for the lifting international sanctions.

Later on, however, the U.S. State Department published on its website an outline of some more key issues of the framework.

Zarif criticized the U.S. version, saying on Twitter that "the solutions are good for all, as they stand. There is no need to spin using 'fact sheets' so early on."

After every political event, "each side focuses on their own perspective of what has happened and what will happen and it is natural that each side highlights the parts that are more to their benefit," Abbas Araghchi, a top Iranian negotiator, said Thursday.

"The Americans did it in written form... and our narrative which was a real one was thoroughly expressed in Mr. Zarif's remarks. We don't intend to publish it in writing yet, but we will do so if necessary."

Another negotiator, Iranian Atomic Energy Organization chief Ali Akbar Salehi, said the U.S. fact sheet mixed up "truth and lies" and "it could be said that they offered their own interpretation in order to create tension in our country."

Iran's supreme leader Ayatollah Ali Khamenei, who has the final word on all matters of state, was also defiant over a final deal.

"The main problem is that from now on details must be discussed, and since the other party is unloyal, stubborn and into backstabbing, in the discussions on details they might restrict" the negotiators and Iran, he said in a speech Thursday.