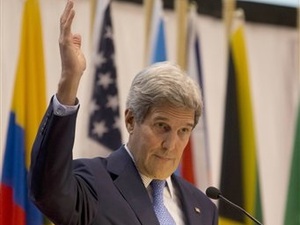 Secretary of State John Kerry will this week defend an emerging deal intended to curb Iran's nuclear ambitions, urging skeptical U.S. lawmakers not to put up obstacles that could scupper the tough negotiations.

"I'll lay out the facts," Kerry told CBS' "Face the Nation" on Sunday when asked about a different narrative emerging from Iranian leaders about the outlines of a deal agreed in Lausanne, Switzerland earlier this month.

"Everything I have laid out is a fact. And I'll stand by them."

The Lausanne framework marked a major breakthrough in a 12-year standoff between Iran and the West, which disputes Tehran's denial that it is seeking to acquire nuclear bomb.

Global powers must resolve a series of difficult technical issues by a June 30 deadline for a final deal, including the steps for lifting global sanctions imposed on Iran, and lingering questions over the possible military dimensions of its nuclear program.

"I think people need to hold their fire and let us negotiate without interference and be able to complete the job over the course of the two-and-a-half months," Kerry said.

The State Department angered Iran when it released a fact sheet on April 2 about the Lausanne outlines, which appeared to differ from the Iranians' understanding of what had been agreed.

Iran's Supreme leader Ayatollah Ali Khamenei, who will have the final say on any deal, plunged the accord into doubt last week suggesting that "nothing is binding" while President Hassan Rouhani demanded that sanctions be immediately lifted when any deal is signed.

Global powers -- Britain, China, France, Germany, Russia and the United States -- have said sanctions will only be gradually eased and want a mechanism to ensure they can be swiftly reimposed if Iran breaks its word.

"We had this same duelling narratives, discrepancies, spin, whatever you want to call it with respect to the interim agreement" reached in November 2013, Kerry said.

But he insisted that Iran had complied with the interim deal freezing parts of its nuclear program in exchange for limited sanctions relief.

Kerry, however, has come under fire from U.S. lawmakers, including his former Republican Senate friend and adversary John McCain who last week said America's top diplomat was "delusional."

"I think you're going to find out that they never agreed to the things that John Kerry claimed they had," McCain told a radio show on Thursday, adding that Kerry was now trying to "sell a bill of goods hoping that maybe the Iranians wouldn't say much about it."

Kerry refused to be drawn into a tit-for-tat argument with McCain.

"What we're looking for is not to have Congress interfere with our ability, inappropriately, by stepping on the prerogatives of the executive department of the president, and putting in place conditions and terms that are going to get in the way of the limitation of a plan," Kerry told NBC's "Meet the Press."

But President Barack Obama on Saturday lept to Kerry's defense.

Suggesting America's top diplomat was "somehow less trustworthy in the interpretation of what's in a political agreement than the supreme leader of Iran -- that's an indication of the degree to which partisanship has crossed all boundaries," Obama told reporters in Panama.

Obama said he could understand that people might not trust Iran, which has not had diplomatic ties with the United States since the 1979 storming of the U.S. embassy in Tehran.

But "actively communicating that the United States government and our secretary of state is somehow spinning presentations in a negotiation with a foreign power, particularly one that you say is your enemy, that’s a problem. It needs to stop."

French Foreign Minister Laurent Fabius meanwhile agreed Sunday that "there remains work to do" to reach a final deal after talks in Saudi Arabia.