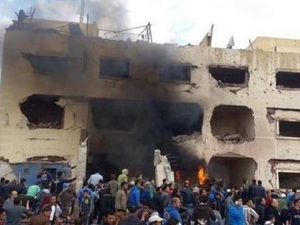 A suicide car bomb targeting a police station in Egypt's restive Sinai Peninsula on Sunday killed six people, including a police officer, and wounded at least 44 others, police and medics said.

The bombing came hours after a roadside blast hit an army vehicle killing six soldiers and wounding two in the peninsula, where security forces are battling an Islamist insurgency.

At least 15 of those wounded in the car bombing were policemen, medics said.

Police said the attacker drove a truck loaded with explosives but covered with straw and detonated it close to the police station in North Sinai's provincial capital of El-Arish.

The facade of the police station was damaged, police said, adding that several nearby buildings also suffered damage.

Who but Iran is aiding, funding, and arming the ISIS in Sinai through Hamas in order to kill Egyptian soldiers!