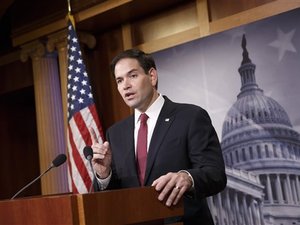 Senator Marco Rubio announced to donors Monday that he is launching a U.S. presidential campaign, becoming the latest -- and youngest -- Republican in the race to succeed Barack Obama in the White House.

U.S. media reported that Rubio told major donors on a conference call about his plans, hours ahead of a glitzy launch event in Miami where he is expected to present himself as the next-generation candidate in the candidate.

Rubio's staff, while not directly confirming the announcement, re-tweeted a news report that the senator was running for president.

The 43-year-old first-term senator aims to contrast himself with older contenders like fellow Floridian Jeb Bush, his 62-year-old mentor-turned-rival for their party's nomination, and Democrat frontrunner Hillary Clinton, 67, who announced her candidacy on Sunday.

Rubio wants to take Americans beyond the dynastic Bush-Clinton dynamic that has ruled U.S. politics for much of the last quarter century.

Bush, who expected to officially announce his candidacy in the coming weeks, is the son and brother of two presidents, while Clinton is the wife of former president Bill Clinton and was Obama's first secretary of state.

Rubio joins two other Republican first-term senators who are already in the race: Ted Cruz of Texas, who like Rubio is Cuban-American, and Kentucky's Rand Paul, a libertarian-leaning lawmaker whose father Ron Paul ran for president several times.

He is a Tea Party favorite with potential to draw conservative votes.

But he angered core conservatives two years ago when he helped craft a historic immigration reform bill that would have provided pathways to citizenship for millions of undocumented workers, a plan he has subsequently backed away from.