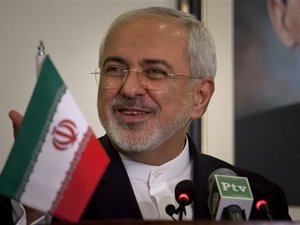 Zarif made the comment during a visit to ex-Soviet Kazakhstan as he praised the Central Asian nation for giving up its nuclear weapons after the collapse of the USSR.

"Kazakhstan is an important player in this field, as a country firmly committed to a non-proliferation regime and which voluntarily refused nuclear weapons," Zarif said in a meeting with the head of Kazahstan's Senate.

"We all want a nuclear-free world."

Tehran and international powers including Russia made a major breakthrough on April 2 in a 12-year standoff by agreeing an outline deal aimed at curbing Iran's nuclear drive.

Tehran's denies Western claims that it is seeking to make a nuclear bomb.

Global powers must resolve a series of difficult technical issues by a June 30 deadline on order to seal a final nuclear deal, including the steps for lifting global sanctions imposed on Iran.

Iran's Supreme leader Ayatollah Ali Khamenei, who will have the final say on any deal, has plunged the accord into doubt suggesting that "nothing is binding" while President Hassan Rouhani demanded that sanctions be immediately lifted when any deal is signed.

During his visit to Kazakhstan, Zarif thanked President Nursultan Nazarbayev for supporting international talks over a framework deal after two rounds of nuclear talks were held in the country in 2013.

Nazarbayev, whose country shares a recently-completed 930-kilometer rail link with Iran and mutual neighbor Turkmenistan, congratulated Zarif on the framework deal while acknowledging that "not all issues have been solved."

Nazarbayev, who has sought to maintain good ties with the major regional powers of Iran, Russia and China, is expected to travel to Tehran to meet Rouhani later this year.