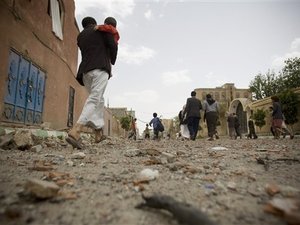 The U.N. Security Council vote came soon after Iran, a key ally of the Huthi Shiite rebels, proposed a peace plan for Yemen calling for a ceasefire followed by foreign-mediated talks by all sides.

Fears are growing of a humanitarian disaster in the impoverished state, which sank deeper into violence and chaos after a Saudi-led regional coalition launched an air war on the Huthis and allied rebel troops on March 26.

U.N. rights chief Zeid Ra'ad Al Hussein called Tuesday for investigations into the high level of civilian casualties that account for almost half of the at least 736 deaths recorded in the conflict.

Al-Qaida has sought to exploit the turmoil to expand its foothold in Yemen, a front-line in the U.S. war on the Sunni extremist group.

But in a setback for what Washington considers the deadliest branch of the jihadist network, Yemen-based Al-Qaida in the Arabian Peninsula said its ideological leader Ibrahim al-Rubaish had been killed in a drone strike on Monday.

Russia, which has friendly relations with Iran, abstained from the U.N. Security Council vote, but did not veto the measure that was put forward by Jordan and Gulf countries and backed by the other 14 of the 15 Council members.

The Huthis have seized swathes of Yemen since they entered the capital Sanaa in September 2014 after sweeping south from their northern stronghold.

The air campaign by Saudi Arabia and a coalition of five Gulf monarchies along with Egypt, Jordan, Morocco and Sudan has so far failed to stop the rebel advance.

The U.N. resolution was the first formal action taken by the Security Council since the start of the Saudi-led bombing raids.

The resolution demands that the Shiite Huthis withdraw from Sanaa and all other areas seized during their months-long offensive.

It slaps an arms embargo on Huthi leaders and their allies, a measure that Russia sought to extend to all sides in the conflict.

The Huthis have allied with troops loyal to Saleh, who was forced from power in 2012 following a year of nationwide protests against his three-decade rule.

Russia had demanded humanitarian pauses in Yemen but the resolution fell short of that request and instead instructed U.N. Secretary General Ban Ki-moon to intensify efforts to negotiate such ceasefires.

Hadi and Gulf allies have accused Iran of arming the Huthis, which Tehran strongly denies.

Iranian Foreign Minister Mohammad Javad Zarif said Tuesday that Tehran was proposing "a ceasefire followed by all inclusive Yemeni dialogue that is facilitated by others, leading to the formation of a government in Yemen that represents a broadly based community."

Hadi, who has taken refuge in Riyadh, is considered the legitimate head of state by the United Nations, and Saudi Arabia launched the air strikes at his request.

Zeid said attacks on hospitals and on civilians unconnected to the fighting were war crimes.

"Any suspected breach of international law must be urgently investigated with a view to ensuring victims' right to justice and redress and to ensure that such incidents do not recur," he said.

Before the latest chaos erupted, Yemen had been a key U.S. ally in the fight against al-Qaida, allowing Washington to carry out longstanding drone attacks on its territory.

AQAP said Rubaish, its Saudi-born ideological leader who spent several years in the U.S. military prison in Guantanamo, was killed with several other militants in a "crusader raid" on Monday.

The Huthi rebels have faced resistance from al-Qaida as well as Hadi loyalists and armed tribesmen in their push south.

Operations were suspended at Yemen's only gas export terminal in the southern province of Shabwa on Tuesday after tribesmen drove out soldiers guarding the site, accusing them of links to the rebels.

The tribesmen pledged not to interfere in operations at the Balhaf plant, operated by Yemen LNG, in which France's Total has a stake of almost 40 percent.

what has Iran got to do with Yemen ( An Arab State) to propose a peace plan? where was this evil rogue islamist backward country when its huthis took over Yemen by force and tried to subdue 70% of the population....

Yup - even Putin could not stomach these Houthis.

hell, mowaten makes more than that in one week posting here on naharnet. do you want his email?

Daniel I am sure Mowati n here from Dahyeh, a good guy, only if he hadn't these 60-70 problems, in any way, he would love to add you as his wife if you can take him from Lebanon, even he, can't stand what Hizbillah is doing to this country, please take him and he will not make wear any shadour or make you clean, just rake, him he willappreciate it all his life, will Imam he will.

Daniel I am sure Mowati n here from Dahyeh, a good guy, only if he hadn't these 60-70 problems, in any way, he would love to add you as his wife if you can take him from Lebanon, even he, can't stand what Hizbillah is doing to this country, please take him and he will not make wear any shadour or make you clean, just take, him he will appreciate it all his life, will Imam he will.

iran has been warned by the US to comply with the arms embargo. will they?

yemen is an arab country and iran had nothing to do with sending weapons to the houthis.

Geha - Iran is about sectarianism and not nationalism.

today an Al Qaeda leader was killed by a drone strike in Yemen. Do you think it was a Houthi drone? naive!

Eagle - Southern, Mowaten and Mystics are drones. So why not?

ya southern, the hundreds of thousands who went on the streets in Yemen and ousted Saleh who is now allied with the Huthis were 'wahabis' and wanted to install a wahabi regime in Yemen... is that what you are saying...

The Ansarallah will make history. The world will remember how a group of oppressed people rose up and fought slavery. How they fought and pressed on despite heavy bombardments and attacks from all sides, how these honorable people are fighting with bravery are beyond imagination.

This is a real revolution and war for freedom just like we had in the Southern Lebanon 2006 July.

Mystic - You are truly delusional.

I am delightful to see so many Wahabi stooges, based in Quebéc & Vancouver whine every single day about my comments.

If my comments show any form of tension, that is your paranoid thinking. The Wahabis are the ones that are tense at the moment waging illegal wars.

I guess you believe that the Houthis took 30 Saudi villages. Lol