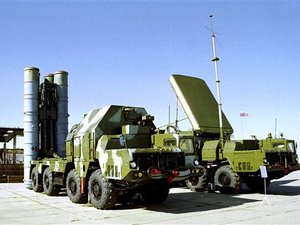 In a telephone conversation with Russian President Vladimir Putin, he warned that such a step "would only increase Iran's aggressiveness in the region and would undermine the security of the Middle East," his office said.

The Kremlin said  that,  during the call, initiated by Netanyahu, "Putin explained in detail the logic of actions of the Russian leadership."

An ensuing statement from the Israeli premier called the "sale of advanced weaponry to Iran" a "direct result of the dangerous deal on the table between Iran and the P5+1," a reference to major world powers.

"Can anyone still seriously claim that the deal with Iran will enhance security in the Middle East," Netanyahu asked.

Tehran had said Moscow's move, announced Monday, would be a step towards "lasting security" in the region.

The United States too objected to Russia lifting the ban.

State Department spokeswoman Marie Harf said: "Given Iran's destabilizing actions in the region, in places like Yemen or Syria or Lebanon, that this isn't the time to be selling these kinds of system to them."

The S-300's capabilities are not fully known, but would be a major upgrade of the country's defenses.

While the updated V-series would allow Iran to intercept missiles fired by regional foes such as Saudi Arabia, experts say they would not be a match for the latest U.S. war planes.

Neither the United States nor Israel have ruled out military strikes on Iran's nuclear facilities as a means of preventing the Islamic Republic from acquiring nuclear weapons.

The Russian decision followed the April 2 framework deal between Iran and six world powers aimed at curbing Tehran's nuclear program, ahead of talks on a definitive agreement.

Russia had agreed to sell the missiles to Iran in 2007, but called off the deal two years later to show its dedication to the nuclear talks, in which it is working alongside fellow permanent U.N. Security Council members Britain, China, France and the United States, plus Germany.

In remarks in Madrid, Iranian Foreign Minister Mohammad Javad Zarif said Tuesday the talks would resume next week, ahead of a June 30 deadline for a final deal.

Iran is demanding that crippling sanctions be immediately lifted when any deal is signed.

But the world powers have said sanctions will only be gradually eased and want a mechanism to ensure they can be swiftly reimposed if Iran breaks its word.

Israel strongly opposes the emerging deal, which it fears will be unable to prevent Iran from developing nuclear weapons, should it choose to do so.

Iran denies it is seeking to acquire a nuclear bomb.