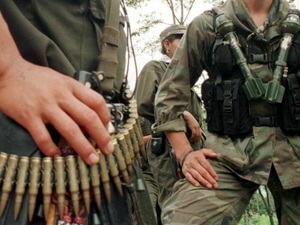 FARC rebels blew up a water plant in southwestern Colombia, military officials said Saturday, in the latest alleged attack by the guerrilla movement on the nation's infrastructure.

Fighters with the Revolutionary Armed Forces of Colombia "detonated a high power explosive device" that destroyed the facility in the town of Algeciras, disrupting service to some 13,000 people, a military statement said.

The attack follows two others this past week on Colombian utilities, both on electrical plants, that led to major power outages.

Presumed FARC rebels on Tuesday blew up an electrical tower, plunging the southwestern town of Tumaco into darkness.

Two days earlier, guerrillas allegedly were responsible for a similar strike on a power facility in the port city of Buenaventura.

The attacks notwithstanding, the Marxist rebels with the Revolutionary Armed Forces of Colombia and the government are in peace talks dating back to November 2012, to end a decades old civil war.

The conflict has killed some 200,000 people and uprooted more than six million since FARC launched its Marxist-inspired insurgency in 1964.