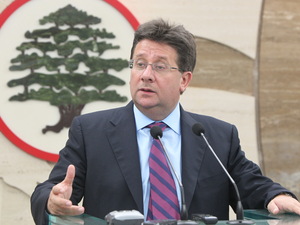 Change and Reform bloc secretary MP Ibrahim Kanaan held talks Monday with the main Christian parties in a bid to clinch their support for Free Patriotic Movement chief Michel Aoun's proposal on carrying out a survey to determine which Christian party or parties are influential in the country.

Following a meeting with Lebanese Forces leader Samir Geagea in Maarab, Kanaan said the LF chief reiterated to him “his support for organizing the survey.”

“It is a democratic necessity to explore the choices of Christians whenever the need arises and there is no need to give this issue other dimensions or to claim that it violates the legal norms,” Kanaan added.

“It is unacceptable to keep Christians outside the equation at every juncture. We are supposed to be in a country that respects (sectarian) balance, partnership and the National Pact,” he underlined.

The lawmaker noted that he emphasized during his tour the need to “reach common ground among the Christian parties regarding the issues of the presidency, the survey and what should come next.”

Asked whether he sensed a welcoming response from the Christian leaders he met, Kanaan said he was optimistic “although there are several viewpoints.”

“We will mull the responses we received in a bid to reach common ground. We launched an effort and an initiative under the slogans of democracy and the Christian choice,” the MP added.

Asked whether his bloc might carry out a similar tour to explore the stances of non-Christian parties, Kanaan said “the survey would be limited to Christians in the first stage in order to determine the Christian choices.”

“That's why this tour was confined to the Christian parties, but we totally acknowledge that our partners in the country must have a say in this and that the president must enjoy their support and approval,” the MP went on to say.

“I briefed MP Gemayel on the details of our initiative and I carefully listened to his remarks on it. Communication will definitely continue to reach common denominators,” the MP added.

Earlier in the day, Marada Movement leader MP Suleiman Franjieh announced his backing for the survey that the FPM and the LF are planning to carry out.

“We don't reject any survey but we want it to be transparent and for several firms to carry it out,” Franjieh said following talks with Kanaan.

“All the Christian political parties should first give their approval to the questions that will be asked in the survey,” said the lawmaker.

Geagea, who like Aoun is a presidential candidate, announced in remarks to An Nahar daily on Monday that the LF supports the proposal.

“The survey is aimed at setting the choices of Christians to consolidate them and tell everyone that we have candidates for the presidency,” Kanaan told reporters after meeting Franjieh.

“It is not binding,” he stressed.

“The Christian parties should make serious efforts to elect a president rather than exchange accusations,” Kanaan added.

Baabda Palace has been vacant since the term of President Michel Suleiman ended in May last year.

The rivalry between Aoun and Geagea is partly to be blamed for the presidential deadlock.

But the two leaders announced earlier this month a declaration of intent, which as a first step will likely be put into effect through the implementation of Aoun's proposal to carry out the poll.

Mr. Frangieh, I am like you, let's have the survey but let it be 100% transparent, then let us accept the results of the survey exactly as it is. If as expected Geagea wins it, just don't go around beating around the bush as you people usually do. But the survey should also include a crucial question, "do we the people prefer a candidate other than these two. kamen, if this takes the most votes, then both LF and FPM leaders should immediately step away from the path of electing a new president, end of story. But as you said ya Sleymen, transparentness to 100% or nothing.

I respect Mr. Franjieh, Mr. Flamethrower, and Mr. Mowaten equally for their transparency and wisdom.

The proposed survey is a cynical ploy by aoun and geagea, at least from frangieh you always get his honest opinion whether you agree with it or not.