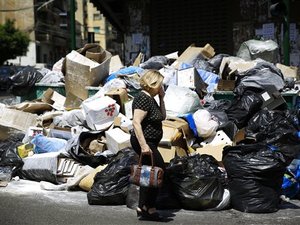 Environment Minister Mohammed al-Mashnouq said on Saturday that the collection of garbage will resume overnight after a final decision was reached on the location of the dump sites that would replace the Naameh landfill that was closed last weekend.

His announcement was made after environmentalists held a protest in downtown Beirut calling for the resignation of Prime Minister Tammam Salam and al-Mashnouq over the waste management crisis that erupted when the landfill was shut down last Friday.

Salam, a number of Mustaqbal Movement officials, and al-Mashnouq have been studying potential solutions to the waste disposal crisis, with resorting to dumping the garbage in the northern region of Akkar as one of their options, reported the pan-Arab daily al-Hayat on Saturday.

It said that Akkar officials have “adamantly refused” allowing its land to be used as an area of waste disposal “following years of neglect by politicians.”

The talks over a solution have been tackled by Salam, Mustaqbal Movement chief MP Saad Hariri, head of the Mustaqbal bloc MP Fouad Saniora, Interior Minister Nouhad al-Mashnouq, and the Environment Minister.

Their efforts were met by the rejection of Akkar officials, “who objected to politicians only remembering the area when it came to disposing trash.”

The officials criticized the state for neglecting the maintenance of the sewage system and government hospital in the northern region.

They also criticized it for the absence of any Lebanese University branches similar to other regions in the country, reported al-Hayat.

Moreover, they said that the landfill project proposed by politicians does not have the proper barriers that would prevent the waste from seeping into ground water used for potable water in Akkar.

The region's locals have declared that allowing the state to dispose the waste of Beirut and Mount Lebanon “will come at a price.”

This issue was discussed in a meeting between Saniora and Akkar MPs Hadi Hbeish and Moeen al-Merhebi on Friday.

The two lawmakers also addressed the matter with the Interior Minister.

The minister sought to reassure the residents of Akkar, urging them “against viewing the politicians' proposals as a challenge.”

For his part, Hbeish rejected any talk of dumping the waste in Akkar, reiterating the locals' condemnation of the state of negligence in the region.

“It's not enough that it suffers from neglect, but now they are seeking to turn it into a dump instead of allowing it to prosper like over provinces,” he lamented.

He called on the government “to take the bold and exceptional decision to treat Akkar equally with other areas regarding development projects that are desperately needed and that can no longer be delayed.”

Beirut and the Mount Lebanon area were plunged in a waste disposal crisis following last week's closure of the Naameh landfill without finding an alternative.

Garbage has been piling on the streets after dumpsters overflowed with tons of trash.

Some people have resorted to burning the waste to tackle the problem, causing toxic fumes.

what's wrong with Rabieh or Tyre or Bin Jbeil?

The Beirutis all come to Tyre to swim because of the sewage dumped in the waters up North. If you dump your garbage on us, where will they swim? There is plenty of empty space in the mountains and the Beqa. Dump it there.

I think the best solution is send it to the Lebanese Palestine border area, there are stretches of land just sitting there, we can resist them with garbage fumes lol.

Why should Akkar solve the mess of POLITICIANS? They are the ones responsible for this and have to solve this problem without dumping it on akkar or any other neglected area for that matter. Well done Akkar and i hope they don't accept to have the politicians dump their negligence on them. Banana republic.

The minimum requirement would be not to have garbage on the roads. Electricity fhimna water fhimna bas don't mess with the garbage.:)