Report: Hariri to Meet Jumblat in Paris over Presidency after Mustaqbal Talks in Riyadh 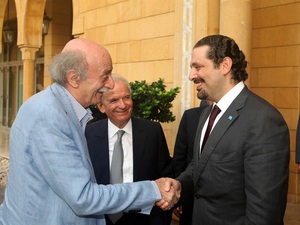 “A meeting will be held in Paris in the coming hours between Hariri, Jumblat and (Health Minister Wael) Abou Faour -- who traveled to France at 4:00 pm on a private jet dispatched by Hariri,” LBCI television said.

“Talks will tackle the presidential void,” it added.

Later on Sunday, state-run National News Agency confirmed that Jumblat and Abou Faour had left for Paris "aboard a private plane."

Hariri had on Saturday described the vacuum at the presidential post as “the biggest insult to the Lebanese people on their national day of independence.”

The meeting was held at the Paris residence of Lebanese businessman Gilbert Chagoury, al-Akhbar newspaper said.

The country has been in a presidential vacuum since the term of president Michel Suleiman ended in May 2014.

Conflicts between the rival March 8 and March 14 camps have thwarted all the attempts made so far to elect a successor.