Bassil on Aoun, Franjieh Meeting: Latest Presidential Developments are Victory for our Camp 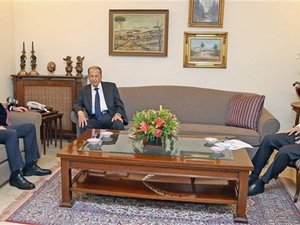 Foreign Minister Jebran Bassil hailed the meeting that was held between Change and Reform bloc chief MP Michel Aoun and Marada Movement leader MP Suleiman Franjieh, saying that it was “honest,” reported the daily An Nahar on Thursday.

“We will not allow any defeat in this issue, but this is a victory that should be bolstered,” he remarked.

His comments came in light of a meeting between Aoun and Franjieh on Wednesday that tackled the efforts to nominate the latter as president.

Aoun himself is a presidential candidate.

Media reports have spoken of tension between the two sides in the wake of Franjieh's potential nomination, which was initially sparked after a meeting between him and Mustaqbal Movement leader MP Saad Hariri a few weeks ago.

Sources close to the Change and Reform bloc told An Nahar that Wednesday's meeting was positive as Aoun and Franjieh highlighted their alliance.

The Marada Movement also asserted that he will continue to back Aoun's candidacy as long as it still stands.

Aoun meanwhile sought to fortify his alliance with Franjieh to avert any possible rift with him, added the sources.

Other political sources however revealed to the daily that Franjieh was “surprised” with a request from Aoun for him to continue on supporting his candidacy.

The MP had also reportedly advised Franjieh “against falling for the political maneuver, especially since the Free Patriotic Movement and Hizbullah do not support the Marada chief's nomination.”

Aoun informed Franjieh that he does not intend to withdraw from the presidential race as long as he still has a chance to reach the country's top post, added An Nahar.

For his part, Franjieh stressed to Aoun that his nomination is not a political maneuver, adding that he is serious about running for president.

-- what was a victory lol such retarded rhetoric.

So wtat is the solution to electing president??? Hariri made a courageous (and politically stupid and inept) step in order and try to get the country out of a very dangerous situation. He seems to have failed. Those who are saying no to Franjieh, can they come up with a candidate? Or are we going to see an empty presidency for the foreseeable future?

Conversation between Aoun and Franjieh:

Aoun: look Slay, you're in my bloc, you need to support me. You're not gonna get our votes.

Franjieh: how am I gonna get votes when we're still boycotting?!

Aoun: that's right, I forgot about that. You got me there, son

Franjieh: but seriously, my nomination isn't a joke.

Aoun: well if we're gonna make any progress, your nomination is gonna turn out to be a joke. Catch my drift?
(to Bassil)
Yalla let's go

sure blocking the presidential elections for 2 years is sure a victory... bunch of losers they are....

Another one who sees (divine) victories in defeat...

Victory is when you get your father in law to become president which is next to impossible.

The big victory for all occurs when all MPs attend a true election of a president without a preagreed candidate.
It would be a real independence to see the known four beside the other brainy, educated and clean hands candidates running for the presidency in a real democratic election.
ELECTION NOT NOMINATION