Change and Reform: No One Can Challenge us in our Support for Saudi Arabia 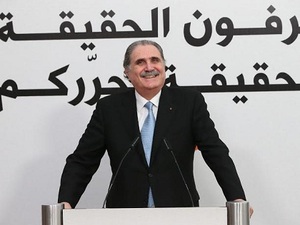 The Change and Reform bloc defended on Tuesday the stances of Foreign Minister Jebran Bassil at the Arab League and rejected criticism that Lebanon violated Arab consensus on regional affairs linked to Saudi Arabia.

Former Minister Salim Jreissati said after the bloc's weekly meeting: “No one can challenge us in our support for Riyadh.”

“Our statements on this issue should not be taken out of context,” he demanded.

He made his remarks after Saudi Arabia's decision last week to halt a $4 billion aid grant to the Lebanese army and security forces in wake of Hizbullah's role in the region and Bassil's stances at Arab and Muslim conferences.

“We are Arab in our identity and Lebanon is a founding member of the Arab League. The constitution explains our Arab identity,” declared Jreissati.

“The stance taken at the Arab League summit does not contradict Arab consensus,” he stressed.

“We always seek Arab consensus and hope this issue will be kept away from the media spotlight,” he continued.

In January, Bassil had abstained from voting on Arab League and world Muslim body statements condemning attacks by protesters on Saudi Arabia's embassy and consulate in Iran. The minister had objected to a phrase describing Hizbullah as “terrorist” in the Arab League statement.

Hizbullah has meanwhile been virulent in criticizing Saudi Arabia's role in the region, blaming it for the unrest in Yemen and Syria.

Addressing the crisis on Monday, the cabinet said that it adheres to Arab consensus, while voicing its support for Saudi Arabia and acknowledging the positive role it has played in Lebanon.

Soon after the statement was issued, Bassil announced that given the choice between “Arab consensus and national unity, we side with national unity.”

Commenting on the months-long waste disposal crisis, Jreissati called for the establishment of landfills, including the reopening of the Naameh dump.

He also demanded that officials seek the country's interests instead of seeking to make financial profits out of the problem.

Lebanon has been suffering from a waste management crisis since the July closure of the Naameh landfill and officials' failure to find an alternative for it.

A plan to export Lebanon's garbage has been abandoned early this week when a scandal broke out revealing that Britain’s Chinook Urban Mining company, which was selected by the government in December to manage the export scheme, may have fabricated its permits.

A chimp doing his weekly show

Not even filling their pockets. Just dreaming that tehrna will make their boss president....