'Countdown' Begins for Implementation of Lebanon's Garbage Plan amid Skepticism 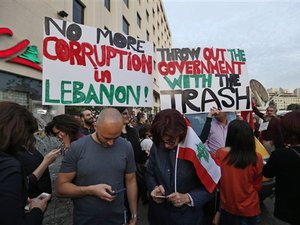 Environment Minister Mohammed al-Mashnouq said on Tuesday that a plan approved by the cabinet to resolve the country's eight-month trash crisis will be implemented within 48 hours despite skepticism on its transparency and results.

“We urge politicians and activists against obstructing” the plan, al-Mashnouq told Voice of Lebanon radio (93.3).

A meeting that was chaired by Prime Minister Tammam Salam on Monday did not set the date for its implementation, ministerial sources said.

Salam tasked the security forces with enforcing the temporary solution that calls for opening three landfills over fears that some parties would “disrupt public order.”

Although the officials, who attended the meeting that was held at the Grand Serail, “did not agree on the zero hour,” the sources told An Nahar daily published on Tuesday that “the countdown has started.”

Garbage collection “trucks are working as usual,” they said.

But “the opening of the three landfills in Bourj Hammoud, Costa Brava and Naameh will take place at the same time, which means that the zero hour will be decided by the contacts,” which will be held with the involved officials on Tuesday, the sources added.

Other ministerial sources told al-Liwaa newspaper that the plan's implementation will start within three days.

The only obstacles hindering the execution of the government's decision are linked to financial incentives, they said.

The government's plan calls for opening the Bourj Hammoud landfill that lies north of Beirut and Costa Brava, which is located south of the capital, for four years pending a permanent solution.

As for the Naameh landfill, it will be opened for two months only to take in tens of thousands of tons of trash that have piled around the country.

Rubbish has piled up on beaches, in mountain forests and river beds across Lebanon since the closure of the landfill, where the garbage of Beirut and Mount Lebanon was being dumped, in July 2015.

The government said it will distribute millions of dollars to municipalities that agree to host the landfills and add spending over the next four years on development projects in those areas.

Despite the incentives, officials representing these constituencies have expressed doubts on the viability of the cabinet's plan.

Among those being skeptical about the government's move is Tashnag Party leader MP Hagop Pakradounian, who said the announcements made by the cabinet contradicted those proposed by a ministerial committee that had been tasked with resolving the waste crisis.

He met with Salam on Tuesday to inquire him more about the details of the plan.

Following his talks with the PM, the lawmaker said the Tashnag party will announce its final stance from the Bourj Hammoud landfill after the meeting of its central committee on Wednesday night.

“We can neither trust the government, nor its solutions and promises,” he added.

Other skeptics include the civil society and mainly the “You Stink” campaign, which on Monday blocked several major roads that lead to Beirut during the early morning rush hour.

The activists claim that the government's measures to open the landfills are not transparent.

They held a demonstration in Beirut on Saturday to reject the option of temporary landfills and demand a more long-term waste-disposal plan.

"the announcements made by the cabinet contradicted those proposed by a ministerial committee that had been tasked with resolving the waste crisis."

- how different were they? Just trying to understand

Dump all rubbish in front of the homes of MPs and foreign embassies! Also Baabda palace.... No one lives there anyway!