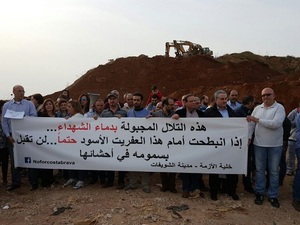 A number of residents and activists held a sit-in Friday on the Costa Brava shore at Beirut's southern entrance to protest a government decision to set up a garbage landfill at the site.

“A group of students, youths and environmental activists staged a protest this afternoon at Costa Brava following an invitation from the National Democratic Gathering,” state-run National News Agency reported.

The Barcelona Convention for the Protection of the Marine Environment and the Coastal Region of the Mediterranean was adopted in 1995.

Residents who took part in the protest decried that the landfill will have an alleged negative impact on their health.

Preparation works kicked off last Friday at the Costa Brava site in Khalde where the government has decided to set up a garbage landfill as part of a plan to resolve the country's long-running waste management crisis.

Choueifat municipal chief Melhem al-Souqi announced that the municipality was “surprised” by the start of works.

Lebanon's unprecedented trash management crisis erupted in July 2015 after the closure of the Naameh landfill which was receiving the waste of Beirut and Mount Lebanon.

The crisis, which sparked unprecedented protests against the entire political class, has seen streets, forests and riverbanks overflowing with waste and the air filled with the smell of rotting and burning garbage.

On March 12, the cabinet decided to establish two landfills in Costa Brava and Bourj Hammoud and to reactivate the Naameh landfill for two months as part of a four-year plan to resolve the country’s waste problem despite the rejection of many residents and civil society activists.

A landfill’s location in the Shouf and Aley areas will be determined later following consultations with the local municipalities, the cabinet said.

Arslan the "resistor" did not get paid enough so he is making noises.