Lebanon Geagea to Aoun: I Didn't Predict a Disgraceful End for You Such as the one We are Witnessing Today 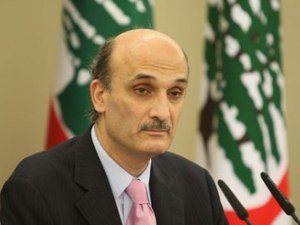 Lebanese Forces leader Samir Geagea criticized on Wednesday Free Patriotic Movement leader MP Michel Aoun, saying: "I did not expect you to reach such a low level and for you to call on your allies to militarily attack your Christian opponents."

"I did not expect you to make up so many lies … Tell me General, do the LF or your allies posses weapons? Are the LF or you calling on the people to civil disobedience against the legitimate legal and security authorities?" he said.

"Yesterday you justified Syria's arrest warrants by saying that the Lebanese judiciary was too slow in implementing its duties, does this mean that every Lebanese citizen who believes that the judiciary is being lax should resort to a foreign judiciary to faster meet his demands?" he asked.

"Is this the sovereignty that you, for decades, have claimed to be striving for?" Geagea continued.

"Is this the sovereignty that hundreds of youth have shed blood for and endured oppression, persecution, and time in prison?"

"My dear friend General Aoun, lying can only get you so far and I had predicted an unsuccessful political end for you, but nothing like the disgraceful end such as the one we are witnessing today," he concluded.