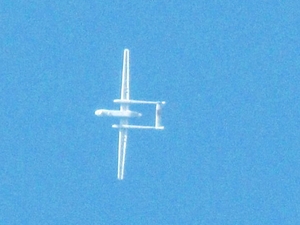 “For three days now, Israeli reconnaissance drones have been flying round-the-clock at medium altitude over the overlapping mountainous regions between the Akkar and Baalbek-Hermel provinces,” NNA said.

“The ceaseless hovering sounds are irritating the residents of the mountainous villages and towns,” the agency added.

Defense Minister Yaacoub Sarraf, who hails from Akkar, meanwhile strongly condemned what he called “Israel's blatant insolence represented in its continuous violation of all international conventions.”

Israel “is seeking to sabotage security and stability in Lebanon through all means,” Sarraf warned.

He said the Israeli overflights are “condemned and rejected,” holding the Israeli government responsible for “any hostile act it may commit against any Lebanese region.”

The minister also called on the international community to “stand by Lebanon to rein in the Israeli arrogance,” cautioning that Israel's actions “contradict with and threaten all international efforts to protect this stability” in Lebanon.