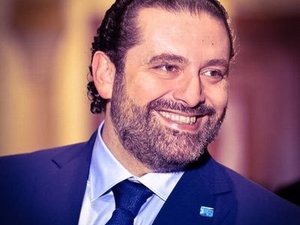 Prime Minister Saad Hariri was quick to congratulate Lebanese filmmaker Nadine Labaki on winning one of the top prizes at the Cannes festival overnight Saturday.

“Congratulations to the director Nadine Labaki and all the crew of the film Capernaum on winning the Jury Prize at the Cannes cinema festival,” Hariri tweeted.

“Entire Lebanon is proud of your success, Nadine,” the premier added.

Labaki dedicated her award to her impoverished amateur cast and her homeland.

Labaki is the first Arab woman to have won a major prize at the festival and only the second to have had a film competing for the Palme d'Or.

Her stirring film "Capernaum", whose 13-year-old Syrian refugee lead captured hearts in Cannes, had been tipped to win the Palme in a bumper years for films from North Africa and the Middle East.

Accepting the third-placed Jury Prize, Labaki said her thoughts were with a 12-year-old cast member, who she discovered selling tissues on the street, and who had probably again spent the day with "her face pressed against car windows."

The glamorous 44-year-old added that she was "almost ashamed to be wearing such beautiful dresses" to promote her film about a boy who takes his parents to court for bringing him into a miserable, loveless existence.

"Capernaum", which won a 15-minute standing ovation at its premiere, catapults her into the big league after "Caramel", her intimate debut about a Beirut beauty parlor, and "Where Do We Go Now?", about women on a mission to end sectarian violence in their village.

As she triumphed at Cannes, Labaki was gracious with her country, "which, despite everything it is accused of, gets by as best it can," she said.

Lebanon "has welcomed the most refugees in the world (relative to its population), despite not having have the means to meet the needs of its own population," Labaki said.

No, not "the entire Lebanon", what she does goes against "The culture of the Resistance".

As I said Mr Hariri, not "the entire Lebanon"